Nobuharu Matsushita took a ridiculous victory in the Formula 2 Spanish GP Feature Race from 18th on the grid.

The Japanese driver took advantage of a safety car to change tyres late on in the race and hold track position, passing Callum Ilott and Yuki Tsunoda to take an unlikely lead.

For a long time it looked as if polesitter Ilott would win the race, but the Brit could not pass Tsunoda and invited pressure on himself, eventually dropping down the order.

Matsushita was joined on the podium by Robert Shwartzman and Guanyu Zhou, who took advantage of a five-second penalty for Nikita Mazepin.

At the start, Shwartzman got the better getaway and took the lead into turn one. Mick Schumacher rocketed off the line and challenged Ilott for second, but the Brit held P2 into the first corner sequence. Zhou dropped down to fourth but kept Felipe Drugovich behind to make it an all PREMA and UNI-Virtuosi front four.

Marcus Armstrong hasn’t had great luck recently and that continued as he spun at turn four, beaching his ART in the gravel.

Armstrong’s off brought out the safety car, but the track was soon green again.

As the front five ran in close formation, Tsunoda pulled a great move on Jack Aitken for P6. The Japanese star went around the outside at Turn 1, dispatching of the Campos in great style.

The leaders weren’t in formation for long though. Ilott got a run on Shwartzman on Lap 8, utilising DRS to pass the Russian on the pit straight.

Shwartzman pitted at the end of Lap 9, as did Zhou, although the Chinese driver lost time in his stop.

Ilott came in the following lap, leaving Schumacher to take the lead on his alternate strategy. Fortunately for the championship leader, Ilott’s stop was quicker than Zhou’s and he stayed ahead of Shwartzman.

Drugovich lasted until Lap 13 on his soft tyres, and it paid dividends. A good stop from MP Motorsport saw the Brazilian exit the pits ahead of Zhou.

Schumacher had a scary moment on the exit of Turn 8, with a snap of oversteer and a wheel in the gravel. The mistake could’ve had more serious consequences than the time lost, but the German saved it brilliantly.

With 20 laps gone, Schumacher really began to struggle on his tyres and the gap to Ilott was shrinking fast.

He pitted at the end of Lap 23. Simultaneously, Ilott passed Nikita Mazepin for the lead with an easy move on the pit straight.

For most of the race it seemed Shwartzman would be the one to challenge Ilott, but Drugovich put in an optimistic move to snatch the position.

Soon after, Giuliano Alesi clashed with Sean Gelael and spun around, bringing out the second safety car of the race.

Ilott opted to pit for a second time, emerging in third behind Drugovich and Tsunoda. Alternate strategy runners Matsushita and Mazepin made their only stops of the race under the safety car. The pair jumped Shwartzman, who also came in for new tyres.

Drugovich pitted the following lap, giving Tsunoda the lead and dropping all the way down to ninth.

The race restarted with eight laps to go and Ilott looked every way possible to overtake Tsunoda.

Ilott’s struggles invited Matsushita to attack and the pair went wheel to wheel in the middle sector. Ilott lost out not just to Matsushita but also to Shwartzman, who moved past Mazepin at the same time in a super move.

At the front the two Japanese drivers went head to head, with Matsushita taking the lead. Shwartzman followed through for second as Roy Nissany hit the wall on the outside of Turn 3, bringing out another safety car.

It seemed we might finish the race under the safety car but there was there was time to squeeze one more lap in. Ilott attacked Tsunoda again but got onto the wrong part of the track, allowing Mazepin to move through.

The Russian didn’t stop there, overtaking Tsunoda into Turn 10. Ilott continued to hassle Tsunoda, but ended up losing out to his teammate Zhou.

Zhou ended up third after Mazepin was given a five-second penalty for a run-off infringement earlier in the race, with Tsunoda holding Ilott off for P4.

Schumacher ended an eventful race sixth, ahead of Drugovich. Luca Ghiotto finished a quiet afternoon in eighth, securing reverse grid pole for Sunday’s Sprint Race. Dan Ticktum and Louis Deletraz rounded out the top ten of one of the most incredible races of the season.

F2 returns on Sunday for the Sprint Race, a chance to do it all over again! 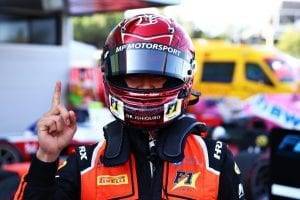