Nikita Mazepin led the way in Formula 2’s chaotic practice session in Bahrain, ahead of the Carlin duo of Jehan Daruvala and Yuki Tsunoda.

In true 2020 fashion, after a two month break, surprises were thrown up from the start.

There was rain at the Bahrain International Circuit alongside delays getting the cars to the pit lane, after work on the track was still being completed.

The conditions proved tricky for some drivers, with dust and morning rain leaving minimal grip, plus the 18-inch tyres providing a challenge.

Giuliano Alesi was quickest for MP Motorsport, before the session was halted with the first of two red flags.

The session was stopped with 34 mins left on the clock, after Artem Markelov spun on the final corner.

Bizarrely, the Russian driver’s HWA car was seen rolling across the circuit without a driver in it and bounced off barriers on the inside exit of the corner.

Theo Pourchaire lined up alongside Markelov in the HWA on his Formula 2 debut. The French driver was runner-up in the 2020 Formula 3 Championship and is eyeing up a place in F2 next year.

Sean Gelael also returned to action for DAMS after missing nine races, as a result of broken vertebra sustained during the Feature Race in Barcelona.

With the cars trying to get up to speed, the session was red flagged once more after Marino Sato spun at the final corner with 24 minutes remaining.

Prior to the red flag, the ART of Christian Lundgaard was quickest. However, with only six drivers completing more than five laps, many were still getting to grips with the Pirellis as tyre management for the races could prove to be tricky.

After the second red flag had ended, the Carlin’s set off showing their strong pace. Daruvala went fastest with a 1:42.989.

His teammate Tsunoda was quick to keep up by going second on the timing sheets. However, the Japanese driver was forced to take evasive action after the Trident of Roy Nissany spun at Turn 8.

Both Carlin’s are hoping for a strong weekend and Tsunoda will be looking to impress, with rumours suggesting he will be lining up alongside Pierre Gasly for Alpha Tauri in 2021.

Mazepin went fastest with a 1:42.660, which could not be beaten as light rain began to fall.

The DAMS of Dan Ticktum finished the session in fourth, with Lundgaard in fifth after topping the timing sheets in the middle part of the session.

The second Hitech of Luca Ghiotto finished the session in sixth, ahead of Robert Shwartzman, Guanyu Zhou and Felipe Drugovich’s MP Motorsport in ninth.

The lead Championship contenders of Mick Schumacher and Callum Ilott still have some work to do heading into qualifying. Schumacher ended the session in 10th, with Ilott’s UNI-Virtuosi in 14th place.

Marcus Armstrong managed to finish in 11th ahead of Pedro Piquet and Louis Delétraz.

Alesi, who led the session early on, was 15th in front of Jack Aitken and Pourchaire on his debut in the series. 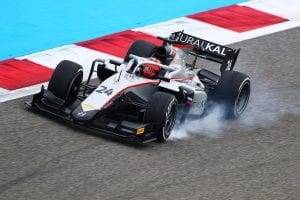