Mazepin promoted to Formula 1 with Haas

Mazepin promoted to Formula 1 with Haas

Haas F1 have confirmed the arrival of Russian Nikita Mazepin for the 2021 season. He will be replacing one of the two vacant seats at the American team on a multi-year deal.

Mazepin has has an impressive season in Formula 2 and shown his pace with some season highlights for overtaking. He has two Feature Race wins in Silverstone and Mugello respectively plus four additional podiums.

The Hitech Grand Prix driver will compete in the Formula 2 season finale next weekend, also in Bahrain, before making the move up to Formula 1 with Haas F1 Team.

“Nikita has underlined his credentials in Formula 2 this year with a brace of victories and a handful of podiums in what’s been a strong sophomore season for him. He’s developed into a mature racer moving up through the junior ranks – notably most recently in the GP3 Series, where he finished runner-up in 2018, and obviously in Formula 2 over the past two seasons. I’m excited to see what Nikita can achieve in Formula 1 and we look forward to giving him the opportunity to compete at the highest level of world motorsport. With a record-setting 23 race schedule set for the 2021 FIA Formula 1 World Championship, he’s going to get plenty of track action to learn all the nuances of grand prix racing.”

Nikita has had his eyes only on Formula 1 and to finish his own personal #RoadtoF1. This was evident when InsideF2.com spoke to the driver earlier in the season.

“I would have to say being in F2 that the goal must be F1. Definitely, if I could wish for one thing in the next few years it would be to be in F1.” – Check out the full interview here. (Home While Away – Nikita Mazepin)

Mazepin graduated from karting into cars in 2015 – competing in Formula Renault 2.0 NEC. Two seasons followed in the FIA Formula 3 European Championship before a move into the GP3 Series in 2018. Mazepin finished as runner-up in the title fight that season with four wins, his success leading the way to Formula 2 in 2019. (Check out our interview with Nikita, discussing his early years and first experiences behind the wheel here.)

Mazepin now will focus on the next race but will obviously be looking with excitement to next season and his dream of an F1 race seat.

“Becoming a Formula 1 driver is a lifelong dream come true for me,” commented Nikita Mazepin on joining Haas F1 Team.

“I really appreciate the trust being put in me by Gene Haas, Guenther Steiner, and the whole of the team. They’re giving a young driver an opportunity and I thank them for that. I’m looking forward to starting our relationship together, both on and off the track, and I’m naturally keen to continue to demonstrate my abilities after a strong Formula 2 season. The team will be looking to me for feedback and inputs in order to refine its package for 2021 and beyond. I will take that responsibility on and can’t wait to get started.”

We at InsideF2.com would like to say a huge congratulations to Nikita as we know how much focus and effort went into his Road to F1. 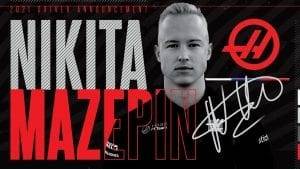