Nikita Mazepin took his maiden win in Formula 2 after a super drive at Silverstone. Mazepin was joined on the podium by the hard-charging Asian duo of Guanyu Zhou and Yuki Tsunoda.

The Russian battled with Mick Schumacher for the lead in the early laps before taking the lead. He looked to be under pressure from Zhou towards the end, but lapped impressively for a comfortable win.

Before the race start, Callum Ilott stalled and had to start from the pitlane. The Brit was set to go from P2 on the grid, but he recovered well to finish fifth.

At the start, pole-sitter Felipe Drugovich got away poorly and lost the lead to Mick Schumacher, who got the perfect getaway.

Drugovich’s dismal first lap continued as Mazepin and Christian Lundgaard passed the Brazilian, who was struggling with the hard tyres.

Schumacher and Mazepin battled for the lead and the Russian made his move at Stowe, and subsequently pulled away.

Lap nine saw Mazepin and Schumacher make their pitstops, with Lundgaard in a lap later.

This released Drugovich and Zhou, who set about making the alternate strategy a successful one.

At one point Schumacher looked set for a race win, but he was demoted by Lundgaard at Luffield. This move was the start of a poor stint for Schumacher, who couldn’t capitalise on his lightning getaway.

Drugovich pitted on Lap 18, but lost time and ended up way down the field, albeit on fresh rubber.

Zhou finally pitted a few laps later, returning to the track in eighth. The Chinese star made the most of his soft tyres, quickly overtaking the likes of Ilott, Jehan Daruvala and Deletraz.

Schumacher really started to struggle in the dying laps, falling to Louis Deletraz, Tsunoda and Zhou in quick succession.

Zhou continued to make moves for the podium, passing Tsunoda and then Lundgaard for second.

Tsunoda snatched third place from Lundgaard on the last lap after going around the outside into Stowe, picking up his second podium in his debut Formula 2 season.

Many were wondering if Zhou could steal the win, but Mazepin was impervious in front. The Hitech man took a first podium two weeks ago in Hungary and backed it up with a win here.

Lundgaard came over the line fourth, ahead of the recovering Ilott and Deletraz. Drugovich finished seventh with Dan Ticktum claiming reverse grid pole with P8. The points paying positions were completed by Schumacher and Nobuharu Matsushita. 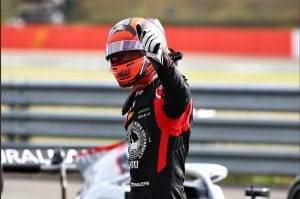