Mugello ?? F2004@SchumacherMick blasts around the track in his Dad's championship-winning car as @ScuderiaFerrari get set for their 1000th Grand Prix ?#TuscanGP ?? #F1 pic.twitter.com/GEgaI4WRop

The car ensured a sixth Constructors’ Championship title for the Maranello based Scuderia Ferrari team. An unbroken run for the team and a fifth straight Drivers’ title for World Champion, Micheal Schumacher.

The German also won two World Championships in 1994 and 1995 and 2004 saw his seventh and final title achieved.

It secured 12 pole positions and many lap records; including six lap records that still stand today.

It suffered just two retirements during the 2004 Formula 1 season – due to accidents rather than reliability.

As Schumacher Jr took to the track the sorely missed grunt of the V10 engine temporarily muted the Sky Sports F1 commentating team as the Formula 2 PREMA driver blasted around the Tuscan circuit.

At the 2019 German Grand Prix, Schumacher Jr drove the F2004, honouring 15 years since his father won his final World Championship.

Despite Ferrari’s agonising 2020 season, their elite presence in Formula 1 is undeniable. Their legacy must be preserved, not only for the memories and outstanding contributions to motorsport but because of their future influence.

“I love to think that Ferrari can create drivers as much as cars” – Enzo Ferrari.

The German is currently leading the Formula 2 Drivers’ Championship with 161 points, eight ahead of Ilott and 16 above Shwartzman.

.@FIA_F2 Sprint Race ?@SchumacherMick consolidates his leadership in the championship with a P4! ?

After finishing today’s Formula 2 Sprint Race in P4, he was quick to jump into the Prancing Horse.

Following his drive in the F2004 At Mugello today, Schumacher Jr said:

“A lot of Kilometres have been done here with the car. Being able to drive it here, the second generation, is obviously very special.”

“The way it was driving and handling was very impressive.” – Mick Schumacher.

It was a poignant moment for the Ferrari team, Schumacher Jr, and racing fans throughout the world.

That SOUND is just something else ?The most winning car and name together again: the F2004 and (Mick) Schumacher celebrate our 1000th GP ?#essereFerrari? #SF1000GP #TuscanGP @SchumacherMick pic.twitter.com/xV250rqChG

The final word of the day respectfully goes to the legend himself:

“I’ve loved every single moment including the good and the bad ones. Those ones make life so special.” – Michael Schumacher. 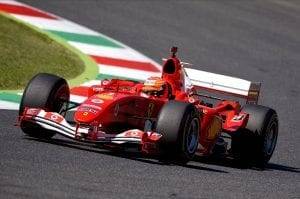