Today we saw the curtain close on the 2020 Formula 1 season. Haas F1 Team had all eyes on them as they used the young driver test at Yas Marina Circuit to run Mick Schumacher behind the wheel of the VF-20, for the whole day.

He would have known the track well following his  first outing with the American squad in FP1 during the Abu Dhabi Grand Prix last week. The 21-year-old German recorded 125 laps around the Yas Marina Circuit.

The general purpose of these test sessions is to get drivers used to race trim cars and build confidence on differing compounds of Pirelli tyres. All of this knowledge will hold the FIA Formula 2 Champion in good stead next season as he debuts in Formula 1 for 2021.

“I feel pretty good, obviously I’m very happy I managed to do so many laps – it’s not always a given in testing. We focused on a good amount of laps, and a valuable amount of laps, which was very positive. The key point from today was just to understand the tires a little more – for that, the long runs were very good. I think we achieved that, and I now have a pretty good knowledge of what I need to do although the tires might be a bit different next year. I feel very comfortable, I know the team’s happy, so that’s good. I really was so happy to be in the car and it was so much fun to drive. I’m really looking forward to next year.”

The Haas Team will be delighted to see their newest recruit take in the miles ahead of next season. Ayao Komatsu, Director of Engineering said;

“So today was obviously the first full day of Mick (Schumacher) being in the car. We really focused on him understanding the car, and then adjusting the car balance to suit and to get the best out of Mick. We really didn’t focus on one lap performance or anything like that, we simply wanted to get him to understand various things like different fuel loads. We also focused on tire management on high fuel runs. It was really good for Mick to experience long runs, both at high track temperature and towards the end of the day when track temperature was then at its coolest. We ran both C4 and C5 tires on long runs. He was making lots of adjustments by himself and using the tools available to him.

“So, today was a very good day. He completed 125 laps – his fitness was absolutely no problem. He completely understood the program in terms of what we wanted to achieve today. He also did 11 starts from the F2 pitlane, his procedures improved as the day continued – to the point he was at a pretty good level. All-in-all we’re very happy. His attitude was excellent, as was his understanding of the program, his understanding of the car and working with the engineers to improve his tire management – it was excellent. We’re very happy.”

Mick now takes a well deserved break after an amazing season for him, we look forward to following his endeavours in F1 next year. Go Get’em Champ! 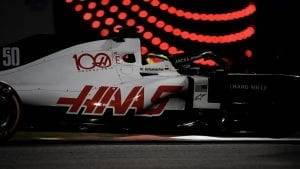