It may be running four months late but it’s fair to say that the first six rounds of this season’s Formula 2 Championship have been exhilarating for both drivers, teams and fans alike.

Nine winners in twelve races have added further intrigue to what has already been an amazing season as nineteen of the twenty-two drivers getting points on the board.

But as the season reaches the halfway point and makes an emotional return to Spa Francorchamps a year on from the tragic events of the 2019 season, it’s now time to reveal what we’ve learnt so far.

Coming into the 2020 season Callum IIott had not just the pressure of winning the 2020 Formula 2 Championship but going face to face with his fellow Ferrari junior academy drivers for a potential Grand Prix seat at Alfa Romeo or Haas.

Further pressure would be added by IIott’s teammate and Renault junior Guanyu Zhou who was also chasing an F1 drive and was tipped by many to be the championship favourite.

However, the first six races have shown that the pressure hasn’t got to the Brit who has won twice this season and has an eighteen point lead in the driver’s standings coming into Spa-Francorchamps.

IIott’s second year has shown signs of a far more polished driver who can handle the tricky 18-inch wheels but also able to put in the qualifying laps that are needed to put the opposition on the back foot.

IIott hasn’t been entirely imperious, however, colliding with Yuki Tsunoda in the sprint race gave him a five-second penalty, with IIott then spinning and stalling in his attempt to catch Dan Ticktum for the race win and to build a big enough gap to hold on to that race win at the checkered flag.

A week ago in Spain saw big points lost, after a dominating drive which looked set for him to win his third race of the season before the safety car came out and saw his lead turn to dust as the field swallowed the Brit up as he came home fifth place.

Despite this, IIott’s had a great first half of the season and looks set to be the man to beat when Formula 2 arrives in Belgium.

Shwartzman and Lundgaard closing in

The stars of what has been a high-quality rookie class of 2020 have been PREMA’s Robert Shwartzman and ART’s Christian Lundgaard. Both have taken three wins in their maiden Formula 2 seasons as well as keeping up the fight to IIott for the championship.

Last year’s Formula 3 champion Shwartzman has produced brilliant performances from the midfield including a stunning drive from eleventh on the grid in Hungary to win the feature race by over fifteen seconds over countryman Nikita Mazepin.

The Russian has got the hang of the controversial 18-inch tyres with the Russian also showing superb wet weather skills in the feature race in the second part of Austria which saw him take his maiden Formula 2 win after holding off Yuki Tsunoda in the final few laps of the race.

For Lundgaard the first half of the 2020 season has seen him lead the ART team with the Dane impressing with his racecraft winning the Dane the sprint race in Austria and very nearly the sprint in the second Silverstone meeting as he was just denied by Ticktum in the dying laps of the race,

However, both have room for improvement, Shwartzman’s qualifying record has frequently put him on the back foot for the rest of the weekend, whilst Lundgaard has been on occasions too keen to move up the order with Dane’s mistakes costing him a good haul of points in the race for the championship.

Nevertheless, both drivers have started well to life in Formula 2 and can only improve as the second half of the season gets underway with Shwartzman, in particular, is hoping to close the gap to IIott.

Drugovich and Tsunoda showing their skill

Both Yuki Tsunoda and Felipe Drugovich have both had great starts to their seasons.

The pair have proven they have what it takes to challenge for win’s with Drugovich being only the third driver to win more than one race this season.

While Red Bull Junior driver Tsunoda’s performances have put him in line for a surprise seat in an Alpha Tauri for 2021 following notable mentioned from the Formula 1 paddock.

Drugovich has demonstrated superb qualifying pace with a surprise front row start at the first Austria meeting which he then followed up with a race win in the sprint race, with the Brazilian also taking pole position at the first Silverstone meeting.

The Brazilian has comfortably outshone his more experienced teammate Nobuharu Matsushita thus far. If his dominant sprint race drive in Spain was anything to go by, the Brazilian could be getting some serious looks by plenty of Formula 1 teams.

Tsunoda meanwhile has been constantly up with the leaders from the second round of the season where he should have won the feature race if it weren’t for a radio problem which kept the Honda junior out longer then he should have been, forcing the Japanese driver to be on the back foot in trying and failing to catch Shwartzman.

Experience has not helped

One of the big changes this year has been those 18-inch rim’s, new tyres and the subsequent changes to the car and balance.

In most circumstances you would expect experience to really count. However, this year despite the argument from many fan’s that the 2020 season is all about “The best bunch of rookie’s” i think some Formula 2 fans may actually ask, “Does experience of prior Formula 2 setup’s affect understanding the 2020 car’s?”

This seem’s a deep question to ask but i think there really is an argument to consider that the more experienced driver’s even subconsciously draw on past experience in what is effectively the same car.

Driver’s might be forgiven for instinctively drawing on performance and actions based on last year’s cars when actually those above mentioned rookie’s may be better placed to live in the moment without overthinking any given situation.

Why we draw this possible conclusion?

We see that some really talented driver’s are not quite hitting the mark in the consistency stakes this year.

Luca Ghiotto’s late return to F2 has seen the Italian’s Qualifying form show his pace but during both double Grand Prix weekends in Austria and Silverstone he couldn’t quite turn that into race points.

Ghiotto though has had his moments in the sun with a win in the sprint race at Hungary after a bold gamble not to pit for fresh tyres paid off, with the Italian scoring a second place in the sprint race in Spain to end a tough first half of the season.

Matsushita too has had a poor start to the season in comparison to teammate Felipe Drugovich. The Driver has been overshadowed at times and the 26-year-old Japanese driver only came into contention in Spain during round six.

He drove a spectacular race and profited from a brilliantly timed strategy which saw him win from eighteenth on the grid, then finishing fifth in the sprint race to cap off his best weekend of the season.

Jack Aitken has also had a slow start to the new season. He has been fairly consistent in the middle of the pack but until recently had not made it back on to the podium.

The Anglo-Korean drivers double podium finish in the second Silverstone being the highlight of the season. He will be looking for some competitive results in the second half of the campaign to make his way back up the order.

Finally we look at one of the most experienced driver’s on the grid in Artem Markelov. The Russian was tipped as a possible dark horse for the 2020 challenge given his record in the past as a great driver. However, his season has been a challenging one. He has been at the back of the pack due to mechanical issues and just downright bad luck.

The new 18-inch tyres brought in at the beginning of the 2020 season to replace the traditional 13-inch tyres have caused chaos with the tyres falling away quicker and at a more ferocious pace.

This again is why maybe the rookie’s have an advantage. That being said, the new tyres have thrown up some crazy races with the alternate strategy playing an ever bigger factor than before,  producing unpredictable races and horrendous degradation that have produced the occasional blowout.

The tyres have also separated the grid into three sections depending on the ones on the grid who can handle all the compounds of tyres to perfection, the ones who are great on some compounds and not on some and then the others who are completely at odds with Pirelli’s rubber.

With temperatures set to cool for the final leg of F2’s European tour before going to the middle east for a humid final couple rounds of the season.

The final two race’s of the year are at Bahrain’s Shakir circuit, and we can only expect the 2020 title being one of Tyre-Deg management.

Will Vips hit the ground running?

Yesterday’s announcement that Sean Gelael’s replacement would be highly rated Red Bull junior Jüri Vips was a slight surprise although not based on the driver’s reputation as a good driver.

Vips arrival into the series puts a possible twist in the soap opera for an Alpha Tauri Grand Prix seat.

The Estonian driver will have to get to grips with the Formula 2 car when the series heads to to round 7. With half of the season missed it will be a steep learning curve for the driver.

DAMS management openly stating that Spa will be a test session for Vips rather than an assault on the podium.

So many questions that need answering.

Does Experience count? Will the second half of the season produce a tenth winner? Will the entire grid secure at least one point-scoring finish? Will one of the drivers in the top five make a final surge to knock IIott off his pedestal?

Only time will tell when we head to Spa Francorchamps this week. 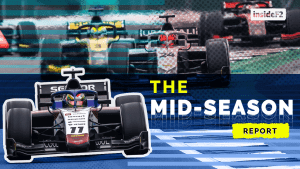