It was a mixed Formula 2 Feature Race for PREMA as Mick Schumacher claimed fifth place and Robert Shwartzman retired.

Schumacher jumped into the lead of the Formula 2 Championship as he claimed his fifth-place finish while his championship rivals finished further down the field or didn’t finish.

The German started his recovery early, but it was after a perfect restart after the first safety car that made the difference. It only took a few corners; he was able to gain positions despite being involved in multi-car contact, which led to another safety car. After the final restart, he muscled his way past two of his title contenders to round out the top five in fashion.

Mick Schumacher said: “I am absolutely delighted with the race result, keeping in mind where we came from today. I had a decent start and tried to make my tyres last in order to benefit from our alternative strategy. Right, when I was set to attack after my pit stop, the safety car came out twice, which spiced things up quite a lot. Fortunately, for me, it changed the race to the better and gave me the chance to move up to P5 in the final stages of the race. I’m very happy to have gained another 10 points and a promising starting position for tomorrow.”

It was an unlucky day for Shwartzman. The Russian got hit from behind before starting the race, forcing the team to make repairs on the grid.

Unfortunately, his gearbox broke while running on the optimal strategy forcing him to retire during the race. It was a tough day for the team and was brought on by unforeseen circumstances to put a hold on Shwartzman’s Championship fight.

Robert Shwartzman said: “Honestly there is not much I can say about today. It has all been really, really unfortunate since the beginning. Starting off with a contact in pit-lane is never the best, but the team repaired the damage, and we were prepared to make gains in the second stint being among the leaders on our strategy. Unfortunately, a car issue forced me to retire. I cannot wait to reset, and even if I will start last in race 2, I will give my 100 per cent to fight back.”

PREMA will hope that their Sprint Race will be better when Formula 2 heads back to the track for the second race of the weekend at 11:55am local time. 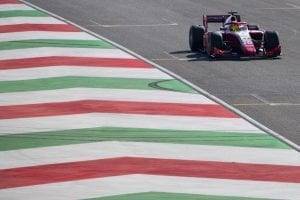