PREMA Racing employed a different run plan than others in Friday’s qualifying session for Round 4 of the 2022 FIA Formula 2 season in Spain by letting their drivers set a time while others pitted.

Daruvala said: “There is more to find, but I’m quite happy,” while Hauger described his session as “frustrating”, adding  that he “struggled a lot, especially in the high-speed corners.”

Hauger will start both the Sprint and Feature Race from 14th, while Daruvala will begin in seventh for the reverse-grid Sprint Race before lining up on the second row for Sunday’s Feature Race.

The Italian team, who have won the teams’ championship in both of the last two seasons, ran in the period where most drivers return to the pit lane after putting laps on the board at the beginning of the session.

The team were hoping to minimise traffic for their drivers, which can be a major issue in the final sector of the Circuit de Barcelona-Catalunya.

The 23-year-old then faced an anxious wait with seeing how well his lap time would fare as his rivals headed out in the final minutes for another set of laps while the Indian stood at the pit wall.

It turned out that the Mumbai-born driver’s lap was quick, as only Jack Doohan, Juri Vips and Frederick Vesti could produce times to beat his PREMA.

Daruvala praised the team’s strategy after qualifying: “It was good because we stayed out of trouble, and I put together a decent lap time.

“We are going to start in a positive position for both races and we have the pace to score points.”

Fellow Red Bull Junior Hauger said his team mate did a “good job” and was also optimistic about his chances for points, although he did admit 14th was “not the place you want to start from.”

The 19-year-old said: “With a lot of tyre degradation on this track, a lot of things can happen, especially if we have a good start.”

PREMA have yet to win a race in F2 this season and will be hopeful that Daruvala can convert his strong qualifying into an equally positive result in Spain. 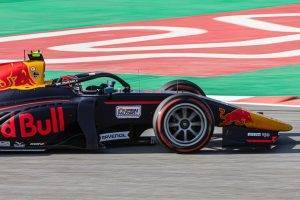