Vips put it all together for Hitech as he claimed two wins in Sprint Race 2 and the Feature Race, to go with his front-row qualifying performance.

The Estonian driver kept himself out of the trouble in the early stages of the second Sprint Race. Vips kept himself near the front of the field before making his move for the lead on David Beckmann.

Vips remained untroubled at the front to claim his first F2 win at the 100th race of the new Formula 2 era.

The 20-year-old then doubled with another impressive win in the Feature Race to become the first driver to score two victories in a weekend with the three-race format.

Vips started the final race in Baku from second and, after an aborted start, managed to get himself into first by Turn 1.

He then stayed there for the rest of the race, only coming under pressure towards the end of the race. Oscar Piastri, who had a penalty, honed in on Vips but never made it close enough to pass ensuring a second win for the Estonian.

Vips said: “I know that I push like a maniac always, so I’d like to think that I made a bit of difference as well, but honestly, I give massive credit to the Hitech boys because our car was really, really good all weekend. So huge thanks to them.

“You know, I really think that the first two weekends could have been the same; we just didn’t capitalise on the opportunities we had and the pace we had.

“This weekend, we just put it all together. We’ll just try to do the same from here onwards.

(On staying out of trouble being key at Baku) “I think that that quote you can really relate to race 2 yesterday because I think that there were some moments when the race could have ended very easily if I would have tried to attack a little bit harder.

“Some people were doing some crazy moves, and I managed to stay cool and stay out of trouble and just use my pace advantage.

“Race 3 was really good; I felt confident in our pace when it came to the pit stop as well, which helped and my out lap was the fastest of anyone as well, so it was pretty much the perfect race, I would say.”

Lawson found the pace early on in the weekend, claiming pole position for the main Feature Race. However, he was left feeling frustrated when the results fell away from him.

The dangers of the reverse grid hit the New Zealander who did not get off to a good start from P10 in Sprint Race 1. Lawson was involved in an incident to end his race early at Turn 2 of Lap 1.

The second race saw Lawson stay out of trouble, to climb from 20th to seventh.

The Red Bull Junior Team driver finally started the Feature Race from pole but lost the lead to his team mate going into Turn 1. A couple of laps later he dropped down to third as Oscar Piastri got past, but reclaimed P2 again just after a safety car.

Lawson began to close the gap to Vips on Lap 6 but was hit with a 10-second penalty for forcing another driver off the track. The team chose to take the penalty at the pit stop, dropping him down the order to 12th.

Lawson eventually fought back to sixth by the end of the race to end his rollercoaster weekend.

Lawson said: “It’s not at all what we expected, I came into the weekend looking for a clean one, and it started great with pole from qualifying.

“I felt really, really food about the track and the car.

“So, for race 1, I just wanted to get through the start. But then I got caught up in someone else’s crash, and the race ended right there.

“Race 2 was a really good race, came from P20, got to P6 and then went to change the brake bias and switched the car off. By the time I got it back on again, I’d lost a couple of places.

“Such a shame, the pace was very good, and even though I had killed the tyres on the way through, we still had it with dead tyres.

“Today in Race 3, I got a good start, but Juri was just a bit quicker; he squeezed at the first corner, so I backed out and then defended from Pourchaire. I  was in front as I moved over, but I guess we went into the pit lane, and that is why I got penalised.

“It is what it is; I can tell it was harsh, but that doesn’t change anything. I served the 10-second penalty at the pit stop and then pushed to get back, killing the tyres again to get up to 6th.

“It’s very disappointing to be one of the fastest track all weekend and not come away with more.”

Vips jumped to fourth in the title race after an impressive weekend while Lawson sits in eighth.

Hitech will use the break to prepare for the fourth round in Silverstone that will take place in the middle of July. 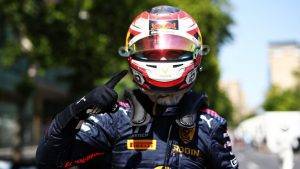