PREMA driver Jehan Daruvala secured second place in the FIA Formula 2 Sprint Race in Baku, crossing the line behind only Frederik Vesti to pick up PREMA’s fifth podium of the  2022 season.

Coming close to a victory, Daruvala started in third place after overtaking two cars in the first two corners to comfortable lead the race in its first half.

Daruvala’s undoing came when the race director required the Safety Car’s services, and the Indian driver dropped to second place at the restart.

On the other hand, Daruvala’s team mate Dennis Hauger didn’t share the same luck during the Sprint Race after hitting the barriers and retiring from the race.

The Norwegian admitted that he struggled during the race, saying: “The pace itself was pretty decent; [I] struggled a bit with the rears, but other than that we were looking quite strong.”

Daruvala’s additional experience at the Baku track helped his performance during the race, helping him to share the podium with Frederik Vesti who took first place, and fellow Red Bull Junior Liam Lawson in third.

“I’m a little disappointed with myself because I was leading and I lost the position. That’s racing. If we had more laps I could have made the time back and try to fight,” said Daruvala.

Despite the ups and downs from the Baku Sprint Race, both PREMA drivers remain confident for the Feature Race on Sunday.

Hauger shared a positive quote to motivate his team: “We can be confident of where we are, and we are going to take the positives from today and use them tomorrow,” while Daruvala said, “I’m confident that with the same pace tomorrow we can move forward and fight for a podium.”

Both PREMA drivers will be in full focus mode for tomorrow’s Sprint Race, aiming to bring their team another victory this time. 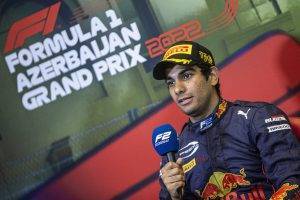