It’s that time of the year where the conversation turns to Monaco’s place on the racing calendar. FIA Formula 2 driver, Liam Lawson, has eloquently stated, that for him, it’s an, ‘extremely unique circuit.’

The Red Bull junior expressed what the circuit is like from a pure racing viewpoint:

“We all know the risks of these sections, and of a track like this. But at the same time that’s what makes it so exciting. You get such a rush. More of a rush around here, at least I do, than any other place.”

Monaco is notorious for the lack of overtaking opportunities. But this is a different kind of race circuit, which enables drivers to use their mental and reactionary skills to greater affect.

“I think that’s one of the reasons why it’s exciting, because you are so close a lot of the times, rubbing and touching the walls.”

Towards the end of the Group B Qualifying sessions, Jake Hughes, looked to clip the wall at the beginning of the Swimming Pool section, and thereafter was a passenger in the VAR, as he launched off the following kerbs and shunted into the barrier.

“With Jake, it was extremely unlucky. I think the wing went under the car when he hit the wall, and that sent him straight, and it had sort of a pinball affect.”

Hughes took a few moments to climb out of the car, and thankfully he did so under his own steam.

“Obviously I hope that he’s ok, because it looked like quite a big shunt. But from my side, I wouldn’t change any of the track. Monaco’s, Monaco.“

Does motor racing always have to be about overtakes and DRS zones? Surely there’s room for a circuit on the calendar that is challenging for the cars, and drivers. And, as spectators, we get to enjoy a driver’s raw skills and talent. 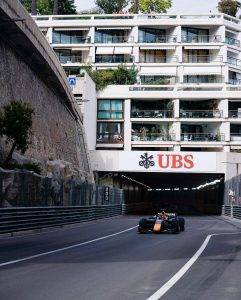