Monaco Podium a “Relief” for Vips

Monaco Podium a “Relief” for Vips

Jüri Vips described his podium finish in the Monaco Feature Race as a “relief” after crashing during both of the previous two rounds of the FIA Formula 2 Championship.

The Estonian driver spun out during Imola’s Feature Race and Barcelona’s Sprint Race, and fell out of contention during the Feature Race in Spain after a slow pit stop.

Monaco was far more successful for Vips, who finished fifth in Saturday’s Sprint Race, and stood on the podium on Sunday. Speaking during the post-Feature Race press conference, the Hitech Grand Prix driver reacted to his comeback:

“I don’t think we ever lacked motivation from my side and the team. It’s more of a relief for everyone that we did a Feature Race that wasn’t a disaster. I hope there’s better things to come, but it’s good motivation for the team and brings a smile to everyone’s face.”

The Red Bull Junior driver has shown excellent pace during his second season in F2, but said that his confidence might have cost him points:

“This year I’m the most confident I’ve been, but that’s also been an issue because I think it’s been a little too much this year.

“The car has been unbelievably good and I realise I have such a good opportunity to win and I’ve over-pushed at times and made some very big errors that have cost us wins and podiums. I’ve had to calm myself down which worked this weekend because I was very conservative.”

Vips had a busy race, spending the opening stint tucked under the gearbox of Jack Doohan, but unable to overtake on the narrow streets of Monte Carlo. He eventually managed to pass Doohan in the pits as the Australian had a slow stop.

Jüri tried to stay with the leading pair of Théo Pourchaire and eventual winner Felipe Drugovich, but was hampered by a bizarre mistake at the hairpin:

“I wound the lock on and because the steering wheel is at 300 degrees, I don’t know which way round it was, so I upshifted and went to third and then fourth [gear] accidentally and nearly stalled. I lost like four or five seconds with that.”

Vips, who was ninth heading into the weekend, emerges in fifth in the Championship, albeit with less than half the points tally of Drugovich. He will hope to continue to score good points when F2 returns for the next round in Baku. 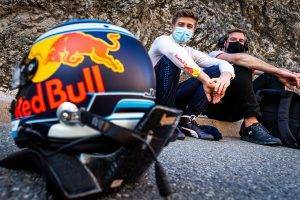