Monza Match Point: How Drugovich can become F2 Champion at the temple of speed

Monza Match Point: How Drugovich can become F2 Champion at the temple of speed

With just 2 weekends to go on the FIA Formula 2 calendar, the crowning of champions is drawing nearer. And with one championship, the opportunity of claiming the title is imminent – it can be done as early as Saturday evening.

Felipe Drugovich has been in a class of his own throughout the 2022 season, taking 5 stunning victories to currently hold a 69 point lead in the championship over title rival Théo Pourchaire. And going into Monza, the Brazilian will have his first realistic chance to seal the title, after an outside chance at Zandvoort failed to materialise.

There are a variety of ways in which Drugovich can claim the title, but the key statistic is that he has to be ahead of Pourchaire by 40 points by the end of Monza. With only 39 points available per Formula 2 weekend, Pourchaire would have to get within this window to keep his title hopes alive heading to Abu Dhabi, something which Drugovich would hope is not the case.

Alternatively, Drugovich just needs to score 10 more points across both of the remaining weekends. This means that even if Pourchaire were to claim the full 78 points, Drugovich’s points tally would be untouchable. And given he has a points average of 19.4 points per weekend, it looks very likely that Drugovich will go on to claim the title.

What can Pourchaire do now? Well, the simple answer is to have a dominant weekend, and hope it all goes wrong for Drugovich. But even then, it’ll require at least one weekend taking both victories, a feat only achieved by one man in Formula 2 – and that was Drugovich himself in Barcelona. It looks as though Pourchaire’s fight may be realistically be over, even if mathematically he is in the running.

However, the teams’ championship is still very much open, and a battle which both Drugovich & Pourchaire can control. With MP Motorsport, Carlin Racing & ART Grand Prix heading to Monza only separated by 20 points, this title will almost certainly be heading to Abu Dhabi, with both Pourchaire & Drugovich vying to help their teams become champions.

If crowned champion this weekend, Drugovich would become the first Brazilian to become Formula 2 champion, with the best previous finish being 2nd in the championship. It would also mark the 11th different nationality of a F2/GP2 champion.

All he needs to do is score 10 more points, or ensure Pourchaire remains at least 40 points behind him, by the end of this weekend. 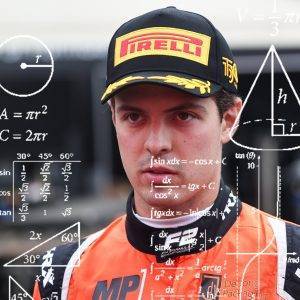