Covid might have put the brakes on the initial start date but when the season did get going MP Motorsport hit the ground running when Felipe Drugovich put in a strong qualifying performance to line up 2nd on the grid for the first race of the championship. Unfortunately Drugovich dropped down to 8th at the chequered flag, but Nobuharu Matsushita climbed from 21st on the grid to finish behind Drugovich in 9th. Drugovich then started the sprint race from the reverse grid pole and led every lap to take a dominant first victory, including the fastest lap of the race.

The British round saw both cars being very competitive and resulted in Drugovich sticking it on pole. Unfortunately both drivers struggled with tyres and dropped a few positions although the race still produced a good haul of points in both feature and sprint races. The second British round a week later was rather mediocre with both cars being mid field for most of the weekend.

Matsushita took advantage of a brilliant strategy in the feature race in Spain to win after starting from 18th. He was the only driver to pit behind the safety car which gave him a considerable tyre advantage to carve his way through the field and cross the line first. This was also a new Formula 2 record for the lowest starting position to win the race. Drugovich brought his car home in 7th. The next day Drugovich made it a double for the team when he claimed victory in the sprint race.

Disaster struck in the Belgium feature race when the two MP Motorsport team mates collided at high speed ending the race for the Matsushita while Drugovich was forced to return to the pits with damage. It was a weekend to forget as Matsushita couldn’t make the start of the sprint race due to the damage sustained in the accident the previous day.

Surprisingly Monza was a little quiet in terms of results for MP Motorsport, but Drugovich then found form once again at Mugello where he finished 4th in the feature race. Matsushita once again made his way through the field from 21st to end a credible 11th.

After the Mugello round Matsushita announced that he would be leaving the MP Motorsport team with immediate effect. Giuliano Alesi moved from HWA to replace him. Alesi was in the seat for the Sochi round and had a best finish of 14th in his first race weekend with the team.

The final two rounds of the championship were run at the Bahrain International circuit. A strong qualifying performance from both drivers would see Drugovich and Alesi qualify in 2nd and 6th positions respectively. Drugovich snuck past Callum Ilott for the lead at turn 1 and took off down the road. After the round of pit stops he had to re-pass Ilott and then built a gap to take a comfortable victory. Drugovich had a quiet sprint race, finishing where he started in eighth while Alesi did well to end in 13th.

The final round made use of a shortened and rather bumpy version of the Bahrain circuit. With plenty at stake for the championship contenders it was set up nicely for an exciting finale. Filipe Drugovich once again impressed as he claimed the final spot on the podium in the feature race while Alesi equalled his best result of the season by finishing the sprint race in 6th.

After a rather disappointing season in Formula 3, Drugovich immediately showed his Formula 2 intentions by winning the sprint race of the opening round in Austria and then had this to say: “It was really perfect. It was also quite difficult because of the restarts all the time, the gap I opened up was closed again so I had to open it up again. Yesterday we didn’t have the result we wanted but now I’m so proud of the team, I’m really happy.”

He scored his maiden pole position at the British round with a stunning qualifying lap but unfortunately dropped to 7th by the time the chequered flag dropped.

Spain was another strong round where he took the sprint race win after starting from second.

The final two rounds in Bahrain seemed to suit Drugovich’s driving style and he was competitive on both weekends. In round 11 he lined up for the feature race in 2nd and drove a great race to claim his maiden feature race victory.

A week later he was once again on the podium for the feature race, this time in third. It  was a solid debut season for the young Brazilian rookie which included 3 wins during the season.

Nobuhara struggled in qualifying for most of the season and because of the low starting positions, it meant he was often playing catch up in the feature races.

The highlight of the season for Matsushita was the brilliant feature race drive in Spain where he managed to take the win after starting from the 18th position on the grid. He had this to say after the race: “Bottom to the top. P18 to P1, Mega pace during the first stint which gives us big confidence and of course luck was with us today but I’m happy to take it.”

He carried that form into Belgium where he had his strongest qualifying performance of the season where he would start 3rd. Unfortunately a collision with teammate Drugovich ended his race and caused a non start for the sprint race.

He decided to leave the team towards the end of September after the first nine rounds of the championship.

Guiliano joined the MP Motorsport team for the final three rounds of the championship after spending most of the season at BWT HWA Racelab.

A new environment didn’t hamper his enthusiasm and he finished the season off strongly with some steady performances including a 6th position in the final sprint race in Bahrain.

Four wins in a season that was so competitively contested is not a bad effort and overall MP Motorsport can feel very satisfied with their performance. I believe they could have achieved a lot more had both cars been able to qualify towards the front more consistently. They will want to build on this year’s performance and could quite easily be a title contender in 2021. 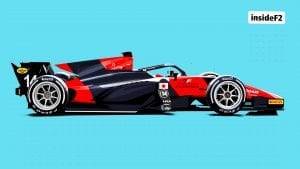