Get to Know Mugello

Get to Know Mugello

Special: Get to Know Mugello

We take a look ahead of the Formula 2 weekend in central Italy. Throughout the weekend we will cover all the action via our dedicated race page (Read more)

Tuscany, the picture-postcard destination in the heartland of Italy where lush green fields meets glorious architecture with high mountains and rolling hills.

Once upon a time this region hosted a key part of the great Mille Miglia road race which ran through the heart of the region and its capital city Florence as the great drivers of the 1950s raced to complete the 1000km trip in the quickest possible time adding to the allure of this picture-postcard region.

Tuscany’s sporting legacy also includes the regions Serie A football team Fiorentina, The Palio horse race held around the streets of Siena, and Calcio Storico a brutal high tackling sport played for the pride of the city of Florence.

The region’s other great exports include earthy Chianti wine, Michelangelo’s David masterpiece, and the World-renowned leaning tower of Pisa which is a must-see for millions of tourists around the globe.

Just under an hour away from Florence and located in the commune of Scarperia e San Piero is a racetrack called the Autodromo Internazionale Del Mugello or Mugello Circuit for short.

Built-in 1973 and opened in 1974 four years after the original Mugello circuit constructed on public roads hosted its final race after fifty years of service, Mugello has been hosting World-class car and bike races since then with the second tier of motorsport’s first race at the circuit being in 1974 with the late Patrick Depailler taking the victory on his way to winning that season’s Formula 2 Championship.

Formula 2 ran for ten consecutive years at the circuit before going on and off the calendar in the late eighties and mid-nineties when the series rebranded as F3000 with Ricardo Sperafico the final winner of the Mugello Grand Prix when contesting the race in the Italian F3000 championship.

However, Mugello has risen to Worldwide acclaim through its hosting of hosting motorcycle racing Grand Prix since 1994 with Valentino Rossi making the circuit his own winning nine times as his ardent yellow-clad wearing supporters flock to the circuit en mass hoping for a victory for their hero.

Mugello is also owned by Scuderia Ferrari who tested at the circuit to check if it was suitable for Grand Prix Racing and not long after it was added to the calendar for the first and possibly only Gran Premio Della Toscana, it also being Ferrari’s 1000th Grand Prix.

The circuit is one of only thirty-four grade one circuits that are eligible to host Grand Prix Racing and it’s support races with the Mugello circuit set to be a challenge for the drivers with its a mixture of slow and sweeping corners.

A fast lap of Mugello can vary in the one-minute twenties to one thirties with the circuit being a rollercoaster ride which will test both the driver’s necks and their tire management skills.

The first three corners beginning at San Donato are low speed and technical before the circuit really speeds up on the exit of turn five named the Borgo San Lorenzo with the cars expected to hurtle flat out through Casanova, Savelli and then uphill to Arrabbiata one and at Arrabbiata two at turn nine.

After a short straight the drivers have to brake hard into turn ten at Scarperia and turn eleven at Palagio before heading into the hairpin at Correntaio before a series of left and right flicks lead the cars into the Bucine hairpin before the long front straight and with it a completed lap of the 3.259-mile track. 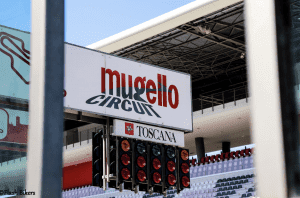