Matteo Nannini has reflected on his maiden Formula 2 weekend for HWA Racelab, the Italian scored his maiden point in the series during the Feature Race in Bahrain.

Nannini, who was confirmed to drive for the German team in the winter of 2021, started off life in Formula 2 well with 14th in the first Sprint Race before finishing ninth in the second Sprint Race later in the evening.

The Italian had found himself briefly in eighth spot at the end of the session following Christian Lundgaard being given a 10-second time penalty for colliding with Lirim Zendeli.

However, the stewards reinstated Lundgaard to his original finishing position of second place, squeezing Nannini back out of the points.

“It was a bit disappointing to lose the points at the end, but I tried to put all this disappointment behind me and push even more in the third race to get into the points.”

Despite the agony of losing points in the second Sprint Race, Nannini rebounded to score his maiden Formula 2 point with 10th in the Feature Race after a scintillating drive from 19th on the grid.

Matteo praised HWA’s strategy for helping him secure his first point in the series.

“I was a bit disappointed with the qualifying pace in Bahrain, which we’re working on in the simulator to try and improve on. I knew that in the race pace, we would be much more competitive and that’s the reason why I was able to recover so many places, although I was lucky that the team did such a good strategy which helped me a lot.”

“Our strategy for the race was to be safe at the beginning and avoid getting into a crash, and after that, I was able to recover places in the middle and end part of the race as tire management is very important  in Formula 2, so for me Bahrain was a good start to the season.”

Bahrain was the first outing of Formula 2’s new three-race format, with drivers now having two Sprint races instead of the traditional one Sprint race that the series has had for several years.

Nannini found the new format challenging but rewarding as well as it gives the drivers more time in the cars.

“For sure, the new format is a challenge, but it is helping the drivers who maybe aren’t the quickest on pure performance a lot. From one side I would also say it’s better because we can do more mileage, kilometres, and we race more.”

The 17-year-old from Faenza will also be the only driver to do both Formula 2 and Formula 3 this season as both series will be supporting Formula 1 on separate weekends, with Nannini staying with HWA-Racelab for his second season of Formula 3.

He explained why he was doing both series in what looks set to be a busy 2021 season.

“After the post-season tests, they contacted me and proposed to do a simulator test at their factory in Affalterbach. We went there, and it went very well, they proposed for me to join their project. This included competing in two championships Formula 2 and Formula 3.”

“I immediately agreed on a deal with them as HWA is a very important team and is in some way related to Mercedes, so I think they can help me a lot for my future if I achieve good results.”

After competing in Formula 3 for HWA this weekend in Barcelona, Nannini will be back in action two weeks later. He and HWA will head to Monte Carlo for round two of the Formula 2 championship.

Nannini is hopeful for a good weekend in Monte Carlo in what will be his first race weekend on a street circuit for some time.

“I am really optimistic for this weekend. I haven’t raced on a street circuit for months, so it will be all about keeping the car out of the wall. Especially in Practice where I want to do as many laps as possible because Monte Carlo is all about getting into the rhythm.”

“I am looking forward to racing in Monte Carlo with such a good atmosphere, and I hope I can get a good result.”

All of us at InsideF2 would like to thank Matteo and his team for giving up their time for this interview, if you want to watch the full version please see the below link. 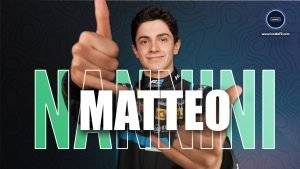