Next Step to Win a Race for Iwasa

Next Step to Win a Race for Iwasa

Ayumu Iwasa, was upbeat after seeing his second FIA Formula 2 podium of the season this weekend in Silverstone. With his first being at the Barcelona Sprint Race in May, he knows his next step is to win a race in his ‘mega speed’ DAMS car.

The Japanese driver’s had an ‘up and down’ weekend with good results on Friday and Saturday, compared to an out-of-points finish on Sunday. Despite this, Iwasa feels he’s demonstrated consistency during the sessions and races:

“For me, just from my side it was a very consistent performance weekend. Because until last events, I was having quite a bad situation even though I was having good speed.

“So basically, all the time I was having good speed. I was messing this up (on previous race weekends), by my mistakes and by some bad luck. But this weekend I could do consistent performance. From Free Practice, a P6. Then P4 (in qualifying) and P2 (in the Sprint Race). And even the Feature Race my performance was quite good.

“I missed out in the Feature Race by a pit-stop mistake, but overall it’s a very positive weekend for me.”

“We are starting to be consistent from the beginning of this season, and even at the end of the last season in the Abu Dhabi test, we have improved a lot. And now we have mega speed, even in qualifying and the race. To be honest we are struggling a bit in the race, until last event, but this weekend it was quite good. I have good confidence with the team and in the car and also my driving performance. I think we need to put it together to win a race.”

Iwasa is another impressive rookie, added to the list of many that have graced Formula 2 in the last few seasons. This weekend at Silverstone saw back-to-back wins for the rookies, with Virtuosi’s, Jack Doohan, taking the top step in the Sprint Race on Saturday, and Carlin‘s, Logan Sargeant, winning the Feature – The first time an American driver has stood on the Formula 2 podium.

Iwasa, realises winning a race is another level. But it’s a realistic step that he and the team can achieve together:

“The car is very good. But [on the] other hand, that is a bit of frustration for me. Even if I am having good potential I cannot win yet. But the next step is to win a race. That’s really a big step, but it is still possible for me.” 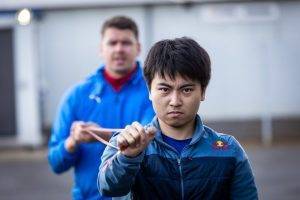