Nikita Mazepin won a crazy Formula 2 Feature race at Mugello from an unlikely P14 on the grid, reigniting his title challenge.

For a long time it looked as if Christian Lundgaard would win, but two Safety Car periods completely changed the order of the race.

Mazepin took advantage of the alternate strategy, making the most of his soft tyres to overtake teammate Luca Ghiotto and Lundgaard on the second restart.

Ghiotto made it a Hitech 1-2, with Louis Deletraz taking a superb third. Neither Callum Ilott or Robert Shwartzman scored points, allowing Mick Schumacher to take the Formula 2 championship lead for the first time in his career.

At the start it was polesitter Lundgaard who got the best start, but all eyes were focused on championship leader Ilott. The Brit started third but spun his wheels and found himself all the way down in seventh.

Ilott lost four places, but Ghiotto gained four, with the Hitech man moving up to P3.

As DRS came into force on the third lap we saw a trio of overtakes on the pit straight. Firstly, Drugovich dived to the inside of Marcus Armstrong for fourth. Ilott recovered to sixth, crusing past Jack Aitken, whilst Yuki Tsunoda overtook Carlin teammate Jehan Daruvala for P8.

Leader Lundgaard was the first to pit at the end of Lap 7, going from soft to hard tyres.

This left Ticktum ahead, but quickly after he lost the lead to Ghiotto at Turn 1. The pair both pitted at the end of Lap 9, and simultaneously Ilott took the lead by passing Drugovich.

Ghiotto’s hard work on track was not matched by his Hitech mechanics, as a slow stop allowed them to regain the position. However, both drivers still exited the pits behind Lundgaard.

The leaders’ stops gifted Mazepin P1 for the first time in the race as the lead alternate strategy runner, with the PREMA pair in that train.

For the second time in the race, Ghiotto passed Ticktum down at Turn 1, braving it around the outside.

Further up the road and crucially in the title battle, Shwartzman began to struggle. Firstly, he was passed by Guanyu Zhou and then by Schumacher and Deletraz. He pitted soon after for soft tyres, having lost plenty of time.

Just a lap later he pulled over and retired, striking a huge blow in his title aspirations.

On Lap 24 of 33, the Safety Car was called out after Giuliano Alesi came to a halt on track. Armstrong and Drugovich pitted for fresh soft tyres as the top five and Aitken stayed out on old hards.

The Safety Car came in at the end of Lap 26, leaving a seven lap dash to the end. Lundgaard slowed the pack down before flooring it. Firstly, Ticktum had contact with Tsunoda, forcing the Brit off the track before Zhou was sandwiched by Aitken and Schumacher.

The UNI-Virtuosi had suspension damage and had to retire, as did Aitken. The clash caused a second Safety Car, with Ilott pitting for a new nose after getting caught up in the melee, dropping all the way to the back of the field.

The second Safety Car period ended with three laps to go and Lundgaard led away again.

It didn’t work for the Dane this time as both Hitech drivers got past, with Mazepin going from third to first.

And it wasn’t long before the ART driver fell off the podium, losing out to Drugovich, Deletraz and Schumacher. Deletraz had good pace and passed Drugovich for third on the penultimate lap.

The Swiss driver pressured Ghiotto but couldn’t make the move stick. Drugovich took fourth ahead of Schumacher and a disappointed Lundgaard. Juri Vips scored his first points in F2 with P7, ahead of Artem Markelov, who claims reverse grid pole.

Armstrong scored his first points since Round 2 in Austria with ninth, ahead of Daruvala in tenth. 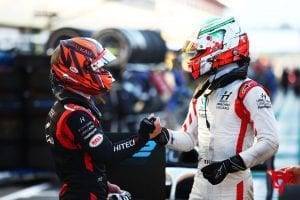