Nissany Drives the Lap of His Life at Yas Marina

Nissany Drives the Lap of His Life at Yas Marina

Roy Nissany, drove the ‘lap of his life’ to take P2 in the closing stages of the FIA Formula 2 Qualifying session at the Yas Marina Circuit.

On the final weekend of the F2 race season, with quite a difficult year in his wake, the Israeli driver was finally able to demonstrate his undoubting talent, by ending Saturday’s Qualifying on a high; immediately behind his teammate, Ayumu Iwasa, who snatched Pole position in the final moments.

“It’s a lot of work that’s been put in during the time off. I had one weekend at home to contemplate, and watch my car being driven by another… I think it may have worked.

“I put it all into one lap and it felt great. I’m very happy with the team, and for us it’s like a celebration, having a one-two.

“Ayumu did a great job as well. It’s very interesting to see big differences between us in terms of driving and data, and eventually such a small gap. So I’m super happy of course. Let’s translate it into a race result.”

Speaking highly of his teammate at the beginning of the season, Nissany graciously accepts his Japanese counterpart will finish above him in the driver standings:

“[Ayumu] is incredibly talented. He is so dedicated. At the beginning I taught him a lot when he came into F2. There is a saying in Hebrew that the student came up and hit the teacher, you know?

“He’s so talented and gifted, he deserves every result he gets. He has a bright future. I learned a lot from him throughout the year. Obviously we will stay great friends for life.”

Iwasa was equally as surprised with the Qualifying result, when his DAMS team told him of the one-two at the end of the race over team radio. Iwasa, jubilantly laughed, saying:

The Red Bull Junior is arguably the hardest working driver in the paddock, on most occasions being the last man standing. He’s frequently seen working tirelessly with his engineers and mechanics in the garage and paddock, until late into the evenings. He is no doubt reaping the rewards.

Nissany will start Saturday’s Sprint Race ninth on the reverse grid. There’s a good opportunity to score points from that position. However, there are drivers ahead with big ambitions for 2023, who will be fighting for every point they can. With this in mind, Nissany could become caught up in the tussle, potentially spoiling the party; Sunday’s final Feature Race of the 2022 Formula 2 season.

“The top goal [in the Sprint] will be data gathering for Sunday. Nevertheless, we could get some points, try to push ourselves further up in the Championship. Not that the hopes are that great in that term, but it will always feel good to end the season on a high like this. Sunday is the goal, so let’s make sure we learn from Saturday and apply it on Sunday, rather than risk it tomorrow.” 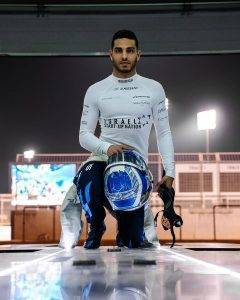