Nothing to Lose for Pourchaire in Monaco Sprint

Nothing to Lose for Pourchaire in Monaco Sprint

Théo Pourchaire, is going to give the FIA Formula 2 Sprint Race everything he has on Saturday, with a, ‘nothing to lose’ attitude.

The youngest ever F2 Monaco race winner knows how to get the most out of this tricky street circuit, and also himself:

“It’s only ten points. I have nothing to lose. There’s not another sprint race with a reverse grid [as in 2021] so maybe there is a bit more opportunity than last year. But the most important for me is that it’s a race.”

With no mandatory pit stop, a race strategy can’t come into play like it will in Sunday’s Feature Race. Therefore, it will be difficult to improve on the reverse grid qualifying position for the pole sitter, who will start 10th tomorrow.

“Well, I think tomorrow, we’re going for a long quali, with the Sprint Race. We’re going to do some cool laps, and fast laps. But unfortunately it’s going to be a bit boring – it’s Monaco, it’s like that.

“At least I will try to overtake, if I have the opportunity.”

Both of the Formula 2 qualifying sessions encountered incidents, none more serious than Jake Hughes. The Van Amersfoort driver clipped the wall in the Swimming Pool section, and was propelled into the barrier, after bouncing across the kerbs.

“First, I didn’t see the crash, he touched a little bit of the wall and touched the kerb. For sure, the kerbs are made for that, they are made to stop the cars from going too far. It’s a difficult section. It’s very fast. It’s a bit of a blind section, because you come through the left-hander, Turn 12, and then you are flat out.”

Hughes climbed out of his stricken car, to everyone’s relief, including ART driver, Pourchaire:

“I hope he’s fine, I think he’s fine, and that’s the most important.” 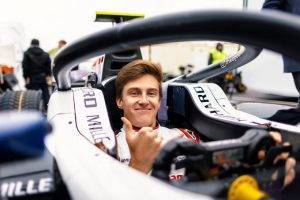