Following the Sprint Race in the soaked Silverstone circuit, Clement Novalak reflected on claiming his fourth-best FIA Formula 2 race finish from his rookie season after hard-fought battling took his MP Motorsport up five places from P18.

In his last Silverstone visit two years ago, the Frenchman bagged a second-place podium in a Formula 3 machinery to show how capable he is of impressing at a circuit that he knows very well.

However, despite not expecting much this time and finishing outside the points-paying positions, Novalak was still satisfied with how the race played out.

He managed to overtake a handful of drivers to gain five places, which he referred to as ‘good fun’ while former Trident teammate Jack Doohan took his maiden F2 win.

When InsideF2 asked how his race went, the Frenchman responded: “It was okay. The pace was definitely stronger in the wet than it was in the dry.

“I was kind of hoping for it because it has been a bit of a struggle recently, but it was fun a few moves around the outside, down the inside, especially at the beginning, and there was a lot of water.

“I struggled with quite a lot of oversteering, which didn’t really help. Afterwards, it sort of settled down and started to dry up, and I think everybody had the same issue, but it was fine in the end.

“I went around the outside of Nissany at Brooklands, which was cool. It was pretty tight, but it was a good move. That’d probably be my favorite one, but the rest of them are weird.

“You’re trying to sort of judge the conditions where you can brake and outbrake someone. So, it was definitely good fun.”

Novalak thoughts on his and the team’s performance so far

MP Motorsport currently sits on top of the Teams’ Championship standings with 158 points.

His more experienced teammate, Felipe Drugovich, has carried the team with four wins and two podiums in just 13 races from the 24-race season, as he aims to secure the title.

The French-Swiss driver picked out Barcelona and Jeddah as good examples of when the team was performing well.

At these venues, Drugovich took three wins and a podium, while Novalak consistently stayed in the top 15. The F2 rookie also believed it’s normal to have unwanted results in a competitive field: “It’s just the case that [in] a championship, you never have an easy run through it.

“Whether it’s from the team’s point of view or ourselves as drivers. We were extremely dominant, [at] like tracks like Barcelona and Jeddah. I think the car was extremely strong.

“There are some tracks that are going to suit your set up some less. So, that’s where we try to improve, of course.

“Overall, it’s always up and down. But … it’s not like Formula One, where you have such a big advantage in the end. It comes and goes from track to track. We just need to keep pushing.”

Though the Sprint Race result wasn’t exactly what he needed, Novalak remains positive about the lessons he could learn in the Feature Race on Sunday.

“It’s looking good for the team, for myself. I can only hope to learn as much as possible while we’re still here.” 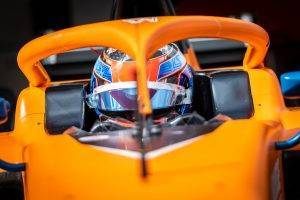