Novalak Happy to ‘Get Into a Groove’ in Abu Dhabi Sprint

Novalak Happy to ‘Get Into a Groove’ in Abu Dhabi Sprint

MP Motorsport’s Clément Novalak enjoyed driving around the Yas Marina Circuit en route to 14th place in the Sprint Race for Round 14 of the FIA Formula 2 Championship, he told InsideF2 after the race.

Novalak had set a lap time good enough for 17th in qualifying, but it was deleted after he was found to have exceeded track limits at the final corner, Turn 16, on the previous lap. He was thus demoted to 20th for both races and faced an uphill climb.

“Starting from the back, it was always going to be a long race. Pretty much the DRS in this car doesn’t do anything,” Novalak said.

“Essentially, the only way to get past people is to put on lunges from about 20 metres back into Turn 6, so it’s extremely dangerous. … You’ve basically got to divebomb.”

The Swiss-French driver made a fast start to pass both Campos cars of Ralph Boschung and Olli Caldwell in the opening corners.

Novalak then overtook F2 debutant Zane Maloney with a lunge into Turn 5 and was battling with Juan Manuel Correa exiting Turn 8 when the red flag came out for a crash between Enzo Fittipaldi and Jehan Daruvala.

That would have put him 15th, but the order at the restart of the race was taken from the Sector 1 split, meaning Novalak was 16th – a turn of events that left the MP Motorsport driver confused.

Nevertheless, the race restarted on Lap 3, and Novalak regained 15th place at Turn 6 on Lap 12 after a long pursuit of Maloney. He then closed up to Correa and took 14th on Lap 21 into Turn 9, finishing in that position when the chequered flag fell at the end of Lap 23.

“It was a tough race. It was fun, though. The two moves that I did properly in the race were actually good lunges, so at least that was fun. Driving in clean air is fun around here; you can just get into a groove,” Novalak said.

“Our pace was extremely strong because once we were in free air, we just catch the guys in front so quickly and drop the guys behind extremely fast as well, but it’s just impossible to overtake.

“I hope tomorrow, we can do something on strategy because I think the pace is definitely there for a top 10 in the race. It’s just a case of figuring out a way to encounter the least amount of cars as possible.”

Drivers will make use of the soft- and medium-compound tyres during the 33-lap Feature Race. It’s a different allocation to that used last year, when Oscar Piastri took his fourth consecutive Feature Race win by starting on the supersoft tyre and switching to mediums.

Those further back in the pack this year have tended to use the alternative strategy of starting on the harder compound and switching to softs later – an approach Novalak is also considering.

“It’s going to depend on what the others do around us,” Novalak said. “Generally speaking, the trend is that everybody goes for the alternative strategy when you’re starting at the back, so I need to make use of maybe some softs tomorrow morning and try to make up as many positions as I can – maybe box early, box late, try and extend the stint, I don’t know. But we’ve got to try to figure something out.” 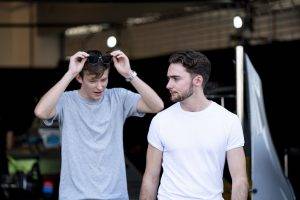