As FIA Formula 2 finally returns, Red Bull Juniors and Hitech GP duo Jüri Vips and Liam Lawson are ready and excited for the challenge of Monaco ahead.

Whilst fellow Red Bull Junior Jehan Daruvala remembers his first time racing in Formula Renault at the street circuit well and hopes that this gives him an advantage over those less experienced on the Formula 2 grid in Monaco.

A new experience for Vips and Lawson.

“I don’t really know what to expect but I am really looking forward to it.” Jüri Vips in his second season of Formula 2, will be racing for the first time like team mate Liam Lawson in Monaco this upcoming race weekend. Having “always liked street races,” Vips believes that this season’s Formula 2 car “will be really nice to drive” in Monaco.

Lawson who had time during the 2 months break between Rounds 1 and 2 to test in DTM, grew up driving the Monaco track “more than any other” in the F1 game but has only had his first ‘taste’ of what racing in Monaco will be like in the Red Bull simulator very recently.

The 19-year-old New Zealander however knows that despite Monaco being a “so historic” circuit and a “track that everyone loves,” that with track time limited for the drivers in Formula 2, and with only a 45-minute practice session and one set of tyres, “it is definitely going to be tough,” as they all try to learn and get everything sorted, before Qualifying without giving up any track time.

Meaning that both Red Bull Juniors will be trusting the experience of the Hitech GP engineers with Vips trusting the engineers to deliver him “a good car like” they “had already in Bahrain and at the Barcelona test as well.” With Hitech GP also competing in Monaco for the first time.

Having raced in Monaco five years ago in Formula Renault, the Indian driver is one of the few drivers on the grid who have had the pleasure of racing the Monaco streets in a super quick car before.

Monaco may not perhaps be his “favourite style of track,” but Daruvala is “tremendously excited” and has had good results on streets circuits in the past such as in Pau.

The last time that Daruvala competed in Monaco, qualifying went well for the Carlin driver then in the Renault, who believes that he “can be pretty competitive” and “go pretty well” this weekend with the preparation he and the Carlin team has done during the break for this race weekend.

A special circuit for all three Red Bull Juniors, as they look forward to jumping back into the Formula 2 cars.

Both Liam Lawson and Jehan Daruvala, find themselves in the points chase and 2nd and 3rd in the Drivers’ Standings going into Monaco separated by only two points.

Formula 2 Rookie Liam Lawson winning the first race of the season in Bahrain and on the podium again in the Feature Race. Whilst Jehan Daruvala also had a strong outing for Carlin finding himself on the podium alongside Lawson in second for Sprint Race 1 whilst finishing in fourth for the second Sprint Race.

But with the fact that this season’s Formula 2 cars haven’t been driven on the streets of Monaco, will this mean that the Red Bull Juniors in their cars make the difference in how their weekend goes with the intricate skill and no room for a mistake that is required to race in the tight, narrow streets of Monaco? 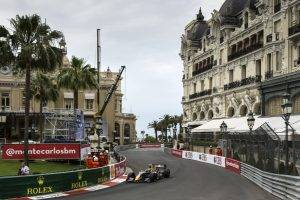