Oscar Piastri will go into today’s Qualifying session with an extra boost of confidence after setting the fastest time in this morning’s Practice session.

The Alpine backed driver who could put both hands on the Championship trophy at the conclusion of Saturday’s Sprint Races showed that he had lost none of his speed going into this weekend after setting a string of fast times in Practice.

Since Formula 2’s last visit to Yas Marina in 2019, the circuit has been dramatically changed, with turns 4-5-6 and turns 11-12-13  being significantly redesigned to improve overtaking possibilities.

The final Practice session of the 2021 Formula 2 season would also mark the return of two drivers who had missed the Jeddah weekend.

Jake Hughes was back in at HWA-Racelab after being rested for Jeddah, whilst race winner Richard Verschoor was drafted in at Charouz to replace the injured Enzo Fittipaldi,  who was still recovering in hospital after his collision with Theo Poruchaire at the start of last Sunday’s Feature Race.

MP Motorsport’s rookie duo of Clément Novalak and Jack Doohan were the first two drivers to set a lap time; however, Novalak’s relatively pedestrian 2:00.609 looked certain to be bettered.

Sure enough, the times began to tumble after just over 10 minutes had gone in the session, with Campos’ Ralph Boschung setting the pace with a 1:39.248 ahead of Bent Viscaal and Novalak.

Christian Lundgaard, on his Formula 2 swansong for ART, was next to go to the top of the timesheets with a 1:37.770, just +0.017 quicker than Piastri and Jüri Vips.

The Dane then improved on his next run by just under a second, increasing his gap over Piastri to just over two tenths in the process whilst Boschung was a further four-tenths down.

Piastri managed to topple Lundgaard from the top of the timesheets later in the session with a 1:36.830.

The Australian then shaved another 0.030 on his next run to continue his reign at the top, with countryman Doohan making it an Australian 1-2, after setting an impressive 1:36.821.

Despite Doohan’s best efforts, no one could better Piastri’s time with Lundgaard third ahead of Boschung, Novalak and Vips.

Jeddah Sprint Race 1 winner Marcus Armstrong was seventh quickest ahead of Viscaal and Robert Shwartzman, with Marino Sato rounding off the top 10. 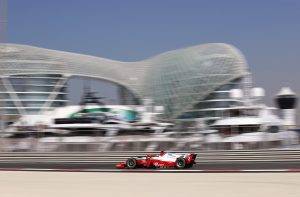