Oscar Piastri claimed his first pole position of the season after a stonking lap that even shocked his team after going more than 5 tenths faster at one point.

Piastri had come into the session just 5 points behind Zhou in the drivers’ championship with pole here being enough to close the gap up to a single point come session’s end.

Richard Verschoor had set the early pace with a 1:40.692 with Dan Ticktum 2nd hoping to claim pole in front of a home crowd after setting the pace in practice.

A slightly code brown moment happened to DAMS’ Roy Nissany as he had to dodge some debris that came off the back of another car at the start/finish straight heading into the Arena section.

Felipe Drugovich then went fastest by 0.043 as the drivers began punching in their flying laps after circling around to generate heat into their Pirelli tyres.

With 20 minutes to go Lundgaard went fastest by 0.078 ahead of Drugovich before being bettered by Shwartzman, then Ticktum and then Piastri who put in a stunning lap to be 0.554 up on Ticktum.

By the halfway point, it was Piastri, Ticktum and Drugovich in the Top 3 with championship leader Zhou in 7th; who struggled to improve pace despite being pole-sitter at the season opener in Bahrain.

After the halfway there was a slight lull as all 22 cars were in the pits with the teams looking to run in a gap of free air. Finding optimum track position to set their drivers up well for their next runs was apparent on the minds of all teams.

With 12 and half minutes remaining, the track became busy again with Lundgaard leading the pack; as the field circled around Silverstone to warm up their tyres.

8 and a half minutes left and the drivers gunned it to punch their final laps and claim the all important pole for Sunday’s Feature Race.

Ticktum set a personal best first sector but he lost in the second sector after having to navigate past a recovering Armstrong who went off at Stowe as improvements were sparse, with the leaderboard remaining relatively unchanged with 5 minutes to go.

Sato slowed as he came round Maggots and Becketts, as he trundled on back to the pits. The Trident driver does not have the best of memories from last year at Silverstone.

Ticktum was the first of the Top 3 trying to better his time but was unable to do so and stayed 3rd , before Shwartzman lost it at Stowe and stayed 6th.

The red flags came out for Shwartzman’s incident at Stowe just as Guanyu Zhou came round to set the 2nd fastest time and the clock stopped at 2 minutes and 12 seconds.

That red flag was enough to stop the qualifying session completely and it was Piastri who scored his first pole position of the season, while question marks over Zhou’s 2nd place time would definitely be looked into. 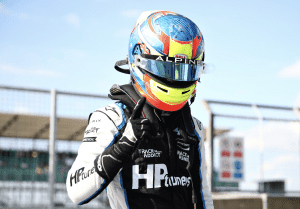