Oscar Piastri talks through his first season in F2

Oscar Piastri talks through his first season in F2

The FIA Formula 3  reigning champion, Oscar Piastri, is ready to kick off his first season in Formula 2  with PREMA.

The current FIA Formula 3 champion, Piastri talks through his preparations and expectations for his first season competing inside the Formula 2 series.

Piastri said: “I think 2021 preparations are looking good. I spent a good amount of time over Christmas and New Year’s in Australia with my family. So, it was good to see them again, I enjoyed some warm weather and a generally covid free environment.”

“It’s been a nice time to relax, obviously now we are back into the serious things with the team, doing all the simulator training and physical work. We’ve had a good camp with Alpine in Tenerife, which was good, and I’m feeling very well prepared.”

Heading to his first race at the Sakhir circuit, he’s hopeful for his chances on track for a good result.

“I’ve done a lot of laps in Bahrain in the last six months. I think the only track I’ve driven since the F3 season ended is Bahrain. So, I can probably do it with my eyes shut.”

Last year, he won the first round of F3, and he looks forward to claiming his victory in this year’s F2 inaugural event.

“For my first result, I think it depends on where we are as a team. If we got the capability to win, then I want to try and win, obviously, that’s how the F3 season started.”

“I know I can do it, but if we got the capability to finish tenth, then I want to try and finish tenth or to exceed what we thought was possible. It depends a lot on what shape we are in as a team because it’s not just up to me to decide the result in this war.”

Piastri pointed out how he sees his goals this season: “I don’t really have any concrete things I want to achieve. I want to be fighting for race wins and hope for the championship. Fighting for the title in your rookie year is not an easy feat, so it’s going to be tough.”

Oscar pointed out that he saw last year more about learning than a championship win. He feels it was the lessons learnt that will stand him in good shape this time out.

“I still have a lot of learning to do,  I’m going into it pretty open-minded, which is what I did for F3. I didn’t have too many expectations, and obviously, this year, I’d like to be challenging Robert.”

Having Robert Shwartzman as his teammate for the season will be another challenge for him.

Both drivers have the potential to win this year and given they are driving for the current team champions, they will be tipped for the top of the standings.

The two drivers are confident, that the battle between them will begin as soon as the season starts. 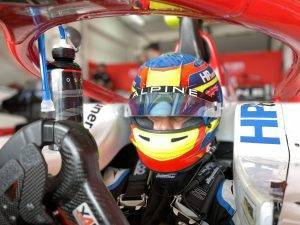