After a chaotic Practice session, which saw a number of mistakes, as well as a hectic FP1, Qualifying added another layer of intrigue on which driver would crack first in the battle for pole position.

Early pace saw Artem Markelov have a brief moment in the sun with the Russian fastest on his first run with a 2:05.202.

But it was Markelov’s countryman Robert Shwartzman who set the early pace with his first flying lap with a 1:49.6 ahead of teammate Schumacher by just over two-tenths.

Jehan Daruvala continued his good pace from Practice to go fastest with 1:49.5 with the Indian’s Carlin teammate Tsunoda splitting the PREMA’s with third fastest.

Callum Ilott’s session got off to a rocky start after being blocked by Luca Ghiotto on his quick lap with the Brit seventh fastest on his first clean run.

Christian Lundgaard was also a victim of blocking after being held by Roy Nissany in the final sector, costing the Dane an early chance of provisional pole position despite going fastest in the first sector.

Jüri Vips had a spin on his quick lap on the exit of Turn 15 bringing out the yellow flags luckily for the Estonian he kept the DAMS’ engine alive and rejoined the track.

Despite the yellow flags Vips’ Red Bull junior teammate Daruvala retained provisional pole position by over two-tenths from Tsunoda and Nikita Mazepin who produced a storming lap to move up to third.

Race Control announced that the incident between Ghiotto and Ilott would be investigated after the session as a number of drivers complained about blocking on their hot laps.

With 11 minutes left the field streamed out of the pits for their final quick runs and with it the final chance of improving on their original qualifying times.

Lundgaard along with fellow Renault junior Guanyu Zhou elected to wait once the field had gone before going back out, with MP Motorsport keeping both Giuliano Alesi and Felipe Drugovich waiting for longer in the hope of a clean track.

Three drivers were still yet to get into the race for pole with five minutes left to go in the session with Marcus Armstrong, Vips and Ghiotto falling to set a time on their first runs.

Daruvala improved again on his second run to break into the 1:48s and increase his margin to teammate Tsunoda by two-tenths, with Zhou moving up to third ahead of teammate Ilott and the two PREMA’s of Schumacher and Shwartzman.

Tsunoda snatched pole position at the end of the session with a 1:48.688 just under six-thousandths of a second ahead of Daruvala to complete a Carlin front-row lockout.

Ilott was fourth fastest and will start alongside his Formula 2 championship rival.

Ghiotto eventually managing fifth alongside Lundgaard, whilst Shwartzman could only manage seventh.

Jack Aitken will start eighth ahead of Zhou and Mazepin who rounded off the top 10.

Vips and Pedro Piquet [just under two-tenths behind the Estonian] qualified in 11th and 12th.

Louis Delétraz’s difficult weekend saw him only manage 13th ahead of Armstrong.

Felipe Drugovich had a challenging session and could only manage 16th ahead of Dan Ticktum, Marino Sato and Roy Nissany.

Alesi’s first weekend at MP ended with a 21st, while Guilherme Samaia will start tomorrow’s Formula 2 Feature Race last on the grid. 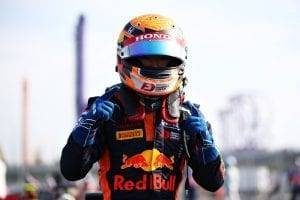