Outstanding Qualifying for Iwasa on Maiden Outing in Monte Carlo

Outstanding Qualifying for Iwasa on Maiden Outing in Monte Carlo

Ayumu Iwasa put in an outstanding performance in today’s Monte Carlo Qualifying session, that saw plenty of incidents and infringements.

Towards the end of Group A’s session, Felipe Drugovich touched the barrier and came to a halt on the start/finish straight, bringing out a yellow flag. Thus impeding the lap times of those on their final push lap.

Iwasa’s performance put him in provisional third place on the grid for Sunday’s Feature Race:

“Yeah, I’m really happy to be honest, because this is Monaco. It was a really nice session for me. Actually, I could get good confidence too in the car and my driving to push to the maximum, so it was very positive.

“I could improve quite a lot in the last push. My best lap was not enough until the second push. So it was very positive. I had quite a lot of margin in Free Practice so it was my biggest improvement. I was feeling the car was quite good, it was very good.”

With this being Iwasa’s maiden race in the Principality, the DAMS driver stated he had done his homework. When asked if he had put in any preparation for this coming weekend, he said:

“I drove it quite a lot [in the simulator], and also I was watching the old races. I think my driving is on the smooth side compared to others. I had good confidence to drive in the slow corners and I think it was working for this track.”

Iwasa was on track when Drugovich came to a stop on the start/finish straight:

“I didn’t see the yellow flag on the last corner. I found the car on the inside wall, on the main straight, so I don’t know [if my time will be taken away] yet.”

After his fantastic P2 in the Barcelona Sprint Race, the Red Bull junior will most definitely want to start third on the grid on Sunday.

“I don’t know yet how tough the Monaco race is. I at least want to have a good start and I will see what I can do during the race.

“I think the car feeling will be changing depending on the car set up and the driving style, maybe I did quite well [today] with the car balancing.”

With Jake Hughes’ accident ending today’s sessions with a Red Flag, the Swimming Pool section is looking like it will be the biggest, yet most looked forward to challenge, for the drivers this weekend:

“From T12 it’s really a high speed section, so I needed good confidence.

“It’s a tricky section for me, but if I had a marginal difference to everybody, it’s not good for the lap times. If I hit the wall, even a little bit, the car will lose some speed and stability, so it’s a very difficult section. But it’s really fun to drive!”

*Based on provisional results. 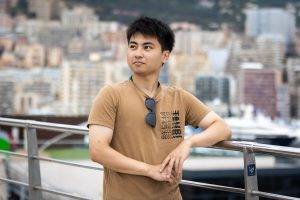