On Saturday at the Circuit de Spa-Francorchamps, Campos’ Ralph Boschung took a surprise podium on his return to the FIA Formula 2 Championship after nearly two months out of the cockpit due to injury.

Boschung started the Sprint Race of Round 11 from pole position but lost the lead to race winner Liam Lawson on the second lap into Les Combes. He then held onto second until the final lap, when Jack Doohan made a similar move to demote him to third.

In early July, Boschung announced that he had been diagnosed with facet syndrome, a condition causing inflammation in the spinal joints, after experiencing severe neck pain for several months.

The pain began in April at F2’s third round at Imola, where Boschung took his only other podium this year with third in the Feature Race.

At the following rounds at Barcelona and Monaco, the 24-year-old withdrew from the weekends before starting the races after the pain became too debilitating for him to continue in the car.
He returned to the car at Baku, scoring ninth in the Feature Race, before withdrawing once more at Silverstone. On 6 July, Boschung announced that he would be stepping away from F2 to begin a period of recuperation.

Speaking to InsideF2 at the press conference after the Sprint Race, Boschung opened up about what life was like at home with the neck injury and how he managed to get back on track at Spa this weekend despite receiving medical advice urging him to delay his return by two weeks to Round 13 at Monza.

“Obviously since Silverstone – when I really took the decision to completely stop with the doctors, which was the right call – it was very tough because I had to stop taking medications.

“Whenever I was racing, I obviously took a lot of painkillers, which kind of masked the reality of the state of the neck. So as soon as I stopped that, it got obviously very bad.

“Just everyday life was very difficult. It’s really something – I mean, it’s very difficult to explain, but it’s just basically, from morning to evening, you barely can move your head, you just have a lot of pain, you feel the tingling in the fingers and so on. So it’s very, very uncomfortable.”

The road that led Boschung back to the F2 paddock at Spa began with a visit to the doctor’s office, where he was encouraged to sit out the Spa round as well as Zandvoort next weekend.

“I did then a couple of treatments probably two weeks ago to try and … reduce the inflammation of the neck, and then I started really having some really good steps with my overall fitness.

“Then I took the decision to make an evaluation with the doctors the week before Spa to see if potentially I could make a comeback.

“But then actually, it was kind of in between – well, they said it would be better to come back in Monza because they would fear that the triple-header would be too much for the neck.”

Instead of following the doctor’s orders to the letter, Boschung chose to race in order to prove his worth to the sponsors he has courted over the years. He acknowledged in his response to InsideF2 that the decision was a risky one.

“I had a couple of discussions with the sponsors and so on. Obviously, I want to also try and talk about my future, and it’s very difficult to do that if you’re not racing, so I took the decision to take a little bit of risk, to come back to Spa.

“At the moment it pays off, but obviously we’ll see after the weekend how the neck will be.”

The driver deputising for Boschung during his three-round absence was Roberto Merhi, an ex–Formula 1 driver who is otherwise competing in Super GT in 2022. Merhi scored a miraculous podium at Spielberg after starting from the back row of the grid but failed to take points in any other race.

The Spaniard jumped in at Campos on short notice, but Boschung explained that his late decision to contest Spa left Merhi with even less time to prepare for his own racing campaign.

“Obviously, just after Silverstone when I left home, I had the idea to place Roberto,” Boschung explained.

“He’s Spanish, he knows very well Campos, he’s very quick, he’s a good friend of mine, and he has a lot of publicity, which can help also for the sponsors. So when we then decided to place him in the car, I was always on the phone with him after the race weekends and so on.

“It got a little bit hectic because he had to go to Japan just before Spa. Actually, I think had to delay his flight one day for me to take the decision, so it was really, really tight. And then I told him that I’m going to go to Spa, and he left to Japan.”

Boschung’s injury has raised questions about his long-term future in motorsport, particularly given the physical demands that the g-forces in single-seater racing place on a driver’s neck. But when asked by InsideF2 about what his future might hold, Boschung responded decisively.

“If everything goes well with the neck, F2 next year.” 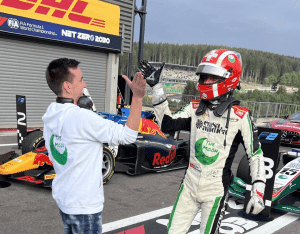