The Pau Grand Prix is one of the oldest street races in Europe and one of the key moments of the season in the ladders of formula racing. This year we will be watching along to follow Hugh Barter in his French F4 campaign.

Pau has a truly unique atmosphere during the Grand Prix race weekend and the whole town comes alive up for the event. As race circuits go, very few can offer such a breath taking atmosphere with such beautiful countryside and stunning mountain panoramas as a back drop.

This charming and characterful circuit has been holding Grand Prix racing since the 1930’s and is one of only two Grand Pix events that are not on the Formula 1 calendar. Can you name the other?

Nowadays it is 2.769 km long counter-clockwise track with 15 turns, located around the Parc Beaumont in the heart of the city. The spectators are very close to the action and could enjoy in one of the greatest motorsport spectacles in the world. With the combination of twists and turns, camber changes and kerb-ridden chicanes, drivers and their cars are put on a real challenge.

A remarkable feature of the track is the grandstand, which lines the start-finish straight. The grandstand overhangs a river which runs alongside the circuit and is assembled each year from a kit of concrete and metal beams.

When the FIA World Championship of Drivers was established in 1950, the Pau Grand Prix wasn’t included in the championship calendar but over the years was one of the F1 non-championship races, as well as part of the Formula 2 championship. Many famous drivers won the race at Pau.

When Formula 3000 replaced Formula 2 as the feeder series to Formula 1, the Grand Prix of Pau remained a part of the European Championship. Until 1998, the Pau Grand Prix still was the action-packed events with many spectacular accidents and incidents. Many future stars participated with the various success – Juan Pablo Montoya won the race twice while Jean Alesi also was among those who won the prestigious event.

Formula 3 and the WTCC races as the main events

In 1999 Formula 3000 was replaced with the newly-formed European Formula 3 Championship. That year the race was shortened to 40 minutes instead of 90 minutes. Until 2006 it was one of the most important races of the Formula 3 Euroseries and again many future stars reached the top spot on the podium – Anthony Davidson, Nicolas Lapierre, Lewis Hamilton, and Romain Grosjean.

This year we will be there following the fortunes of our rising star Hugh Barter. The season has just begun so there is all to play for and given the significance of the event, all drivers will be looking to step onto this famous podium this weekend.

LIVE TIMING THIS WEEKEND FOR F4:

Take a lap of the circuit here: 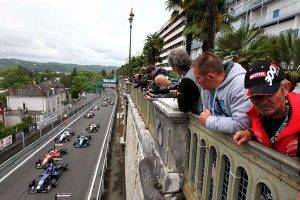