The top three drivers in Qualifying for Round 9 of the 2022 FIA Formula 2 Championship said that their prior race experience at the Circuit Paul Ricard had helped them adapt more quickly.

Formula 2 last raced at Paul Ricard in 2019, so most drivers on the grid have not driven the Dallara F2 2018 there.

However, the FIA Formula 3 Championship raced at the venue in 2021, so the 10 rookies on the grid who competed in F3 last season have more recent experience of the circuit.

In 2020, Ayumu Iwasa won the French F4 Championship, which held three of its seven rounds that year at Paul Ricard. He took three wins and four further podiums across the nine races there as well as four of the six poles on offer.

In 2021, Iwasa took eighth, ninth, and seventh in the three F3 races at the circuit. He explained to InsideF2 that this familiarity boosted his confidence for the F2 weekend.

“I think that it’s a bit handy, but F2 never had a race in Paul Ricard with the 18-inch tyres [implemented in 2020], so that was quite a difficult point. But I think from my side, basically, I had quite good confidence to go quickly.”

“Earlier in Free Practice, I [had] a good feeling in the car and on my driving as well because I had quite a lot of events in French F4 and also last year in F3. But for me, F2 is quite different to F3 and F4 in this track, so it was quite new.

“Now that I know the F2 car with Paul Ricard, maybe I could manage my driving for the race.”

In 2019, Sargeant scored his first F3 points at Paul Ricard with eighth in the Sprint Race, but on his return to the venue in 2021, bad luck struck him as he only took one points finish and retired from Race 3.

“Track knowledge just helps you find the limit much quicker. It definitely makes your life a little bit easier, but I think at this level everyone in F2 is quite familiar with this track,” Sargeant said.

“We’ve done a lot of laps here on the way up through all the feeder series, so I think at the end of the day, it’s a pretty level playing field, and we just have to attract the most out of it.”

Sargeant’s pole at Paul Ricard came after he scored consecutive Feature Race victories at Silverstone and Austria earlier this month. But the lead-up to the Friday evening session was anything but normal for the American driver, who admitted over the team radio that he’d only slept two hours overnight.

“It’s been something I’ve been trying to fix this year, but adrenaline kicks in and that takes over. It’s a great thing.”

Despite turning no laps in Practice earlier on Friday, Frederik Vesti finished the Qualifying session third.

The venue had previously been a happy hunting ground for the ART Grand Prix driver, who took two wins and a second place there in 2019 in the Formula Regional European Championship on his way to a dominant title.

Vesti also took his only pole position of his 2021 F3 campaign at Paul Ricard, but he lost ground during the races and finished off the podium in each one.

“It’s a good track, and I’m looking forward to Sunday because if the tyre degradation is quite high, it should be possible to do good racing. And I think everyone wants that.” 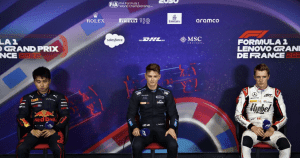