Oscar Piastri won a nail-biting Sprint Race ahead of Dutchman, Bent Viscaal, and his team mate, Robert Shwartzman, as FIA Formula 2 sparkled under the lights in Saudi Arabia.

After receiving a penalty for leaving the track in Sprint Race 1, Jehan Daruvala lined up on pole position with Viscaal alongside him for F2’s second race of the day.

Daruvala got a great start and kept the lead into Turn 1 as the championship leader Piastri moved into P2 ahead of Viscaal.

Sprint Race 1 winner Marcus Armstrong was involved in a multi car collision at the first turn with Clément Novalak and several others causing multiple retirements.

The Safety Car was deployed to clean up the debris which neutralised the opening stages of the race. It would seem the frequent yellow flags and safety cars from Sprint Race 1 would return for Saudi Arabia’s second F2 race.

Championship contender Guanyu Zhou benefited from the first lap chaos from a P17 starting place, gaining four places, and found himself in P13 at the restart.

The Safety Car came in at the end of Lap 4 unleashing Daruvala to streak clear of Piastri behind him.

Vips attempted to repass Drugovich at Turn 1, but damaged his front wing and retired from the race. A sad end to what had been an excellent day for the Hitech driver.

As Vips’ car was cleared away, Bernd Maylander was called into action once again, continuing his busy afternoon. FIA F2 debutant, Logan Sargeant, also retired from the race in a completely separate incident.

Daruvala was under pressure at the restart and locked up at Turn 1, flat-spotting his front tyre. The Carlin driver was handed a five-second time penalty, his second of the day, for gaining a lasting advantage by going off the track.

Even though Piastri sat within five seconds of Daruvala, he continued to hassle the Indian driver for the lead as the duo pulled away from Lundgaard and Viscaal.

Lundgaard had also muscled his way past the Viscaal at the Safety Car restart but did so off the circuit. The ART driver was handed a five-second penalty, like Daruvala, leaving two of the drivers contending for the win severely disadvantaged.

Shwartzman and Dan Ticktum were engaged in a hard battle for fifth place as Shwartzman sneaked up the inside of the final turn in his PREMA.

The under-pressure Daruvala continued clinging on to the lead of the race, as Piastri swarmed all over him at the final turn on Lap 15.

The Australian tried every trick in the book to get past. His persistence was rewarded with four laps to go with an opportunistic lunge on the brakes to pass the race leader into Turn 1.

The Safety Car was again deployed on Lap 18, as Liam Lawson crashed after losing the rear end of his Hitech in a double retirement for the team. A bad stroke of luck for Daruvala and Lundgaard who still had their time penalties to serve.

Thanks to the brace of penalties, championship contender Zhou managed to salvage a top 8 finish to grab a point. Meanwhile, Piastri’s team mate Shwartzman drove to a very respectable P3 to overtake Zhou in the drivers’ standings.

The race finished behind the Safety Car, with Piastri taking his fourth win of the 2021 season, and yet another step closer to the Formula 2 crown. 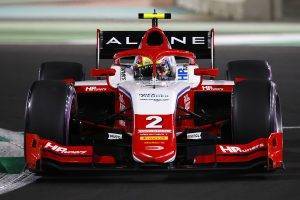