Oscar Piastri isn’t ruling out a historic triple win this weekend in Baku, as he continues to rack up the points in his FIA Formula 2 rookie season.

The PREMA driver exudes a well earned confidence as he heads into Round 3, knowing there are a lot of points on offer in this new F2 format, from two Saturday sprint races and one Sunday feature race.

Piastri knows from previous years it’s possible to win from lower down on the grid, as Formula 1 driver, George Russell proved in 2018 when he went onto win the Sprint Race from 12th place.

The possibilities for this year’s drivers are for the taking, here at Baku, and in the Drivers’ Championship.

Piastri knows he’s had a good, solid start to the year, despite throwing away a few points in Bahrain.

Heading into Round 3 in second place in the driver standings, he momentarily considered:

“It’ll be nice to jump up the order in the championship, and then get the lead. But then ultimately it’s only going to matter after the end of Round 8.” [The final race weekend of the season on Yas Island.]

Also key to the Australian’s dream headline of winning the Drivers’ Championship in his rookie season, is being strong in the later half of the year when everyone has a lot more experience.

“We’ll be taking it once race at a time, and work on our weaknesses.

“I’ll try and move forward but obviously I’ve got a lot of people trying to stop that as well, so it’s not going to be easy.”

Last season’s championship saw the lead switch between drivers multiple times, and the crown went down to the Wire, with Mick Schumacher securing the title over the final race weekend.

With this in mind, and with Piastri’s own Formula 3 title being won by a narrow margin, he maturely philosophised:

“At this point in time we’re still in Round 3. This format there’s a lot of points and things can change, very fast.”

Do you think Piastri can follow in Russell’s or Giovinazzi’s footsteps and make his history this weekend? 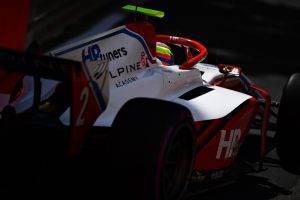