Oscar Piastri dominated proceedings in the Sochi Feature Race and converted his brilliant pole position into a very professional, mature victory from the PREMA driver.

The 20-year-old took an important step on the road to the F2 crown and extended his championship lead to 36 points.

Piastri led the field from pole position with Jehan Daruvala alongside him.

Piastri got a fantastic start as Théo Pourchaire jumped up into P2, getting ahead of Daruvala.

The Carlin driver lost another place on the first lap to Ralph Boschung, the Swiss pulled off a brilliant move at Turn 3 to snatch third place.

The Virtual Safety Car was deployed on Lap 1 of the 28 lap event as the Trident of Bent Viscaal stopped on the track.

Zhou struggled in the opening stages losing four places. The Chinese driver found himself behind the Hitech of Jüri Vips in P8.

Piastri continued to lead up front ahead of Pourchaire holding a slim 1 second advantage.

Home hero Robert Shwartzman enjoyed a great start to the Feature Race, moving up from seventh place to P5 within the first five laps.

Zhou eventually muscled his way past Vips to claim P7 in the sole UNI-Virtuosi after Felipe Drugovich was deemed unfit to race.

Vips pulled into the pits at the end of the lap after a sudden drop off in pace and retired from the fight seven laps into the race.

Daruvala and Shwartzman were the first front-runners to blink and received their Medium compound tyres on Lap 8 as the Ultrasofts continued to lose grip.

Race leader Piastri came into the pits a lap later and enjoyed a magnificent pit stop from the PREMA pit crew.

The Sprint Race winner Dan Ticktum pulled off an epic move on Zhou at Turn 14 just moments before the pair pitted for fresh tyres.

Critically, Piastri repassed Pourchaire shortly after the ART driver made his pit stop for the net race lead with 18 laps to go.

Championship leader Piastri cruised past the yet to stop Deledda to claim P5 in the order. An important move to increase his lead over Pourchaire.

The Frenchman responded on Lap 13 setting the Fastest Lap while he was getting past Deledda.

Piastri breezed past Roy Nissany on the pit straight, moving into fourth place. Pourchaire made light work of the Israeli driver one lap later but lost a second on his pursuit of the PREMA driver.

The championship leader continued his march through the field on Lap 16 pulling off a textbook move on Marino Sato to snatch P3.

Piastri took the race lead with 10 laps to go, storming past Guilherme Samaia into Turn 2 as Lawson pitted for Ultrasoft tyres.

The Kiwi rejoined the race in eighth place behind Zhou and Ticktum.

Pourchaire got ahead of Samaia on the same lap but now found himself 2 seconds behind the race leader.

The Alpine Academy driver Zhou suffered a mediocre Feature Race in Sochi and was marred down in P7 on Lap 21. A sub par day for his championship challenge.

Boschung and Daruvala were engrossed in a thrilling battle throughout most of the Feature Race.

The Campos Racing driver made a big mistake with seven laps left. He locked his left front tyre into Turn 13 and conceded the position.

The Swiss driver lost another place as Shwartzman got passed him for P4 on Lap 23.

Boschung retired from the race with three laps to go, suffering from a puncture. A sad end to his weekend after such a heroic effort.

Piastri drove a magnificent race, the Australian was flawless throughout the 28 Lap event and won the Feature Race for PREMA ahead of Pourchaire and Daruvala.

Meanwhile, Zhou struggled in Race 2 of the weekend and could only muster a lowly sixth position dropping points to Piastri in the championship.

After all the manic action at the Sochi Autodrom in a disrupted weekend. Formula 2 will return to the all new Jeddah Street Circuit in Saudi Arabia on the 3-5 December for Round 7 of the championship. 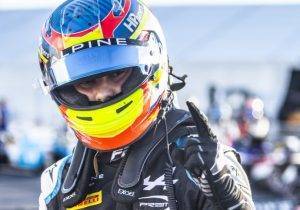