Piastri dominates in Qualifying to take pole for the season finale

Piastri dominates in Qualifying to take pole for the season finale

Oscar Piastri is now six points away from being officially crowned as the 2021 Formula 2 champion after taking his fifth consecutive pole position of the season by over two tenths from Jack Doohan and Guanyu Zhou.

The final Qualifying session of the year would be held under the lights, and although the team’s championship had been decided in favour of PREMA, there were still plenty to play for in the drivers’ championship.

Piastri came into today’s fight for pole with a 51.5 lead over teammate Robert Shwartzman, with UNI-Virtuosi’s Zhou 64.5 points back.

However, Piastri’s challengers would have a chance to eat into the Australian’s lead if they secured all four points that come with qualifying on pole position for Sunday’s Feature Race.

At the green light, all 22 drivers crawled out of the pits to begin the final Qualifying session of the season, with the field using their first lap to warm up the tyres before kicking on with their hot lap.

Piastri continued his excellent form from Practice by going quickest on his first run ahead of Shwartzman and Jehan Daruvala, with Doohan an impressive fourth for MP Motorsport.

As the field boxed for a fresh set of tyres, Piastri was on provisional pole ahead of Boschung and Shwartzman with Daruvala and Doohan over four tenths down on the Championship leader in fourth and fifth, respectively.

Theo Pourchaire would be provisionally joining the Red Bull junior on the outside of Row 3, whilst Row 4 looked set to be an all UNI-Virtuosi affair with Felipe Drugovich ahead of Zhou.

With just over 11 minutes left in the session, the field’s final push runs of the season got underway, with all 22 drivers emerging out on track with a fresh set of Super Soft tyres. The only driver who didn’t go out straight away out on track was Doohan, as he was delayed due to a steering wheel change.

Shwartzman’s came close to knocking Piastri off the top sheets after setting a purple first sector, but he just missed on the provisional pole by +0.059.

Piastri then hit back on his final run to pip Doohan for pole position for Sunday’s Feature Race, with Zhou and Shwartzman filling out Row 2 after the Chinese driver improved on his run.

Boschung ended up in fifth ahead of Pourchaire and Liam Lawson, with Drugovich, Dan Ticktum and Daruvala rounding off the Top 10. 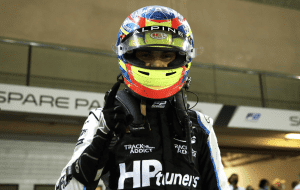