Piastri: Jeddah Gets the Adrenaline Pumping

Piastri: Jeddah Gets the Adrenaline Pumping

Oscar Piastri, popped in a perfect lap to grab himself Pole, at the Jedda Corniche Circuit, on a track he described as, ‘Very fast’ where, ‘ You have to have a lot of commitment.’

The circuit, is newly built, with the track surface being laid just days before. There’s still finishing touches to perfect, but the facilities are all ready for the F2 drivers to battle it out in Round 7.

Qualifying followed a few hours later, and already the F2 drivers could feel the track bedding in by the time they got to the second session of the day.

When asked about the newest circuit on the calendar, Piastri commented:

“It’s very difficult, especially in sector one. It definitely gets the adrenaline pumping.”

The differences on being flat out in Practice and Qualifying, and the race pace in tomorrow’s sprint races, and Sunday’s, feature Race,  was highlighted by the Formula 2 Championship leader:

“In terms of places where I’ll lift and won’t lift tomorrow it’s not going to be the case because we’ll be a lot slower in the races.”

It’s seems to be a fascinating circuit. It’s officially been labelled a street circuit. However, unlike Monaco and Baku where the city returns to normality after the race weekend, everything will remain in place at the Corniche once the formula series’ leave.

“It’s a really unique circuit. It’s not really something we’ve come across and it’s almost a bit strange, because it’s a street circuit, but it’s a permanent circuit with walls on either side.”

“It’s got a bit of a weird dynamic, and then throw in all the fast corners, it’s very similar to Maggots and Becketts at Silverstone, especially the first sector. There’s not really a break for us at all because even the straights aren’t straight, so we’re constantly turning and it’s very different to anything we’ve ever driven on before.”

The PREMA driver stated how the Formula 2 Championship was on his mind, and said that despite his Pole position, going into this penultimate weekend wasn’t any different to any others.

“There’s a lot more than 4 points to lose across the weekend so I need to stay sharp.”

Summarising his Qualifying session, Piastri said: “The last lap I was very happy with. It was a good lap and I’m very happy to get pole.” 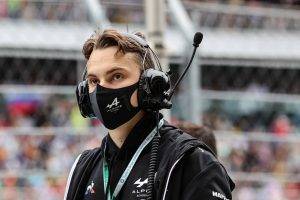