Dreams of becoming the 2021 FIA Formula 2 Champion edged closer to reality for Oscar Piastri following his controlled victory at the Sochi Autodrom.

Nevertheless, the PREMA driver has his feet firmly planted on the ground after he extended his championship lead over UNI-Virtuosi’s Guanyu Zhou.

“It’s nice to have that gap, and now I’ve got two and a half months to dream about that.

“I still want to extend it more and make it a bit more comfortable because with the format this year everything could change in the blink of an eye.

“So not getting ahead of myself with that.”

By securing the victory and pole position, Piastri has more than doubled his  advantage over Zhou from 15 to 36 points.

Furthermore, in achieving a third victory of his rookie campaign, Piastri has upheld his streak of finishing on the podium at every single round so far this season.

Contrastingly, fellow Alpine Academy junior Zhou failed to start the Sprint Race the previous day and struggled at the start of the Feature Race, something which the Australian was keenly aware of.

“My engineer told me on the radio that Zhou was in eighth into the first corner I think, that was good, but then I was very occupied for the rest of the race with trying to keep the victory.”

Yet no two victories are quite like the other as his second consecutive Feature Race victory came in very different circumstances to Monza earlier this month.

With no Safety Cars, ART’s Théo Pourchaire hunting him down throughout and several cars utilising the alternative strategy, it was a not so simple state of affairs out on track.

“I was pushing the whole way and I could see Théo in the mirrors the whole way, and I think the gap was toing and froing a little bit.”

“The most difficult part of the race, or most critical part, was trying to get through the alternate strategy guys quickly.

“The first two cars were pretty straightforward to overtake, but then when I got to the Charouz, I thought he would defend because that’s usually what he does and he didn’t defend this time.

“So I had to spend the rest of Sector 3 stuck behind him and lost a bit of time there. But I think in terms of overall time lost I don’t think I lost anything, and then maybe gained a bit.

“I knew it was critical to try and open the gap if I could.”

Sweet dreams of Sochi now need to turn to objective for Jeddah, as his championship fight heads towards a potential fairy-tale ending.

Could Oscar Piastri secure the FIA Formula 2 title at the penultimate round? 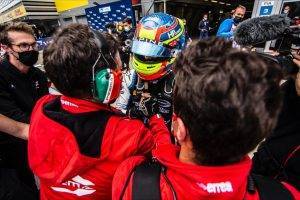