Piastri on a Possible Move Into Formula 1

Piastri on a Possible Move Into Formula 1

The PREMA driver qualified in pole position for Sunday’s Feature Race, and was asked in the post-session press conference if he is inline for the remaining Alfa Romeo seat.

“I really don’t know about the F1 seat next season. There’s the one spot left and a hell of a lot of people trying to get it.”

Realistically he continued, “I’m with Alpine and there’s no engine link, and so the chances are very slim.

“I have no idea what the situation is, which indicates how likely the move will be.”

The breaks between races this season have been long. It’s a factor that may have impacted drivers moving into Formula 1.

Formula 2 is still only at the half-way point because of a new schedule change that’s being tested, and the F1 seats are almost always confirmed by September.

When asked about the breaks, the Australian said:

“I would prefer the F2 season to be earlier. The big break doesn’t have a positive impact on F2 in terms of getting an F1 seat.

“It isn’t ideal having the breaks. Some smaller gaps between the rounds would have helped definitely.”

If Piastri was to win this season’s championship and there wasn’t an F1 seat available for him, he would have to consider other options, such as Formula E, where the 2019 Formula 2 Champion, Nyck De Vries moved.

“A lot of things can change, and I still have to win the championship to make those decisions.” – Piastri.

If he doesn’t win this year, he would of course be be able to participate in the 2022 championship. He stated that it has been suggested to purposefully not win this season.

“I don’t want to give up hope yet, and it just gives me more drive to want to perform in F2.”

Focussing on the second half of the season, he said,

“What more can you do to get into F1? I think I’ve done a good job of putting myself into prime position of a seat. I’ve won two championships in a row, and am leading a third.” 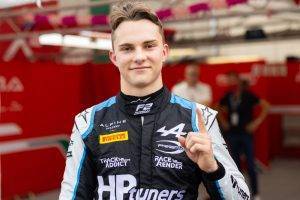