Despite having been on the podium before, the rookie had yet to add a Feature Race win to the list. Afterward, he mentioned how it feels to finally tick that win off on his #RoadtoF1 list.

“Being the feature race winners in Monza feels amazing!”

Although the race itself was rather eventful, Piastri managed to hold on to the lead without too many difficulties and with a very consistent pace.

“It was a very solid race with a great pace the whole way. ”

Piastri remained critical of his own performance, mentioning a small mistake but admitting he is very proud of the way they handled the race.

“I just made one mistake with a lockup after the second safety car, but besides that, I think we controlled the race really well.”

Lastly, Piastri thanked his team, PREMA, for the effort, especially after the team spent a lot of time working on his car on Saturday.

“A big thank you to PREMA for the great car as we even made some improvements yesterday.”

With this win, Piastri managed to extend his lead in the drivers’ championship. There is now a 15 point gap to Guanyu Zhou, who currently occupies the second position in the standings.

There is a lot left to fight for, considering that there are three more rounds to go this season.

In these upcoming nine races, Piastri will undoubtedly try to hold on to the lead, but he will have to brace himself for a tense fight with the other contenders. 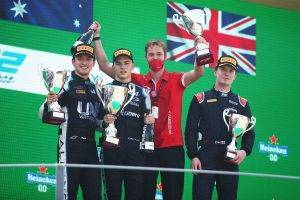