PREMA’s Oscar Piastri claimed another points finish in Formula 2 and a valuable starting position for the second Sprint Race in Monaco.

The Australian driver made a cautious start in the first Sprint Race, and despite losing one spot, kept his nose clean for the whole race.

He eventually finished eighth in a relatively incident-free race, with the absence of any safety cars, which was strange for the tight street circuit.

Piastri said: “We scored P8, which was pretty much the goal we chased for this race, staying in the top 10 and secure a good starting position for race 2.

“It wasn’t the most eventful of races from my point of view, but I’m pretty happy with that.”

The Alpine Academy driver will start both of the remaining races from third.

Meanwhile, team mate Robert Shwartzman touched the barriers at Massenet on the opening lap following contact with another car and had to pit for a new front wing.

However, the car was in no condition to continue the race, so the Russian was forced to retire.

Shwartzman said: “The start was not the greatest, and after that, I had Lawson in front when he braked early, and I was really close.

“I braked as well to avoid making contact, but I still damaged the front wing, which went under the right wheel. At that point, it was impossible to steer, and I ended up into the barrier.”

The Ferrari Academy driver will start the second Sprint Race from the back of the grid, before taking his place on the front row for the Feature Race.

PREMA hope that their good starting positions will help them get a podium and more points when they return to the track for the second Sprint Race on Saturday morning. 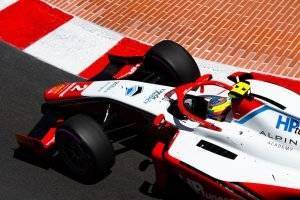