Oscar Piastri extended his lead in the driver’s championship after securing a crucial pole position for Sunday’s Feature race at Sochi.

Despite Jehan Daruvala’s best efforts to take pole position off him, Piastri managed to improve on his final run, to secure a hat-trick of pole positions.

Despite a potential washout looming over Saturday’s action, Qualifying began in glorious sunshine with temperatures hitting a lukewarm 18 degrees as the field left the pits to start the 30-minute session.

At the green light, all twenty-two cars left the pits to begin their installation laps on the super-soft tyres,  with the field jockeying for position to secure a clear track.

The installation laps saw Daruvala top the times with a 2:05.514, ahead of Felipe Drugovich and Zhou, who were over three tenths down.

On the first push laps, it was HWA Racelab’s Jake Hughes, who to the surprise of many, set the early pace with a 1:48.915, but the Brit would be shuffled back to fifth as Ralph Boschung took over at the top of the timesheets with a 1:48.264, over a tenth quicker than Drugovich and a further three tenths ahead of Zhou.

Boschung’s reign at the top was ended by Piastri, as the Australian managed to better the Swiss veteran’s time by over a tenth to put himself on provisional pole.

Zhou was next to go top, with the Chinese driver breaking into the 1:47s with a time of 1:47.994 to relegate Piastri to second.

At the halfway point in the session, Zhou led Piastri and Daruvala, with Boschung an excellent fourth ahead of Drugovich and local hero Robert Shwartzman.

With just over 11 minutes left in the session, the field returned to the track with a fresh set of super-soft tyres to try and improve their grid position.

Piastri hit back on his second push lap to regain provisional pole off Zhou by +0.025, with Shwartzman also improving on his second run to move up to third ahead of Liam Lawson and Daruvala.

With under 50 seconds remaining in the session, Daruvala went onto provisional pole with a 1:47.653, but Piastri found time in the second and third sectors to regain pole position and extended his championship lead over Zhou to 19 points with Daruvala alongside the championship leader on the front row ahead of Theo Pourchaire.

Zhou would lineup a disappointing fourth ahead of Boschung and Hughes, who qualified an excellent sixth on the grid ahead of Shwartzman and Lawson.

Guilherme Samaia and Marino Sato would fill out row 10 ahead of Enzo Fittipaldi and Alessio Deledda, who completed the grid. 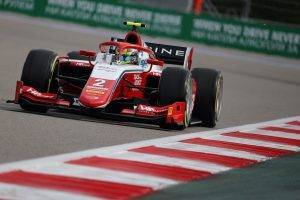