Christian Lundgaard finished second after also making his way past the UNI-Virtuosi. However, his podium place was subject to confirmation as to whether he had served his 10 second time penalty correctly, after his collision with Lirim Zendeli.

A clever pit stop call from PREMA under the safety car helped rookie Piastri to his first win in F2.

Piastri managed to do what he did so well last year in Formula 3, staying consistent throughout the race to put himself in the best position possible.

He was joined on the podium by fellow Alpine Academy driver, Zhou, who had led for the majority of the race and crossed the line in third.

Lundgaard initially finished in second. However, confusion as to whether he served his 10 second penalty properly, as he took it during the safety car period, resulted in Jehan Daruvala standing on the podium.

The FIA later confirmed that the ART driver took his penalty in accordance with the regulations and so held on to second place.

Lap 1, Turn 1 saw the two title contenders collide, after Daniel Ticktum moved to get the inside of Turn 2 and caught PREMA’s Robert Shwartzman unaware.

The Carlin driver was then spun around and both drivers were forced to retire, bringing out the safety car. The incident is being investigated after the race.

It’s safe to say neither of them have had the start they would have wanted.

After starting the race from the front row, disaster struck for MP Motorsport’s Lirim Zendeli on Lap 7.

Contact with Lundgaard’s ART at Turn 1 resulted in a puncture, dropping him to the back of the grid.

Despite the contact, Lundgaard was able to continue without damage, but was given a 10 second time penalty for the incident, whilst Zendeli later retired due to damage.

After winning the first Sprint Race earlier today, Liam Lawson looked to be on his way to  getting his second F2 podium.

Battling for third place with Drugovich, the Carlin was forced to retire following contact with the second UNI-Virtuosi. Drugovich was later awarded a 10 second time penalty for this, which saw him drop to 14th.

Vips, Piastri and Lundgaard all took a gamble by pitting for fresh tyres on Lap 17.  It was a gamble that paid off, since all three managed to make up the positions they lost through the pit stops.

After starting on pole and staying in podium contention for most of the race, all went wrong for Jüri Vips on the final few laps.

The Hitech seemingly lost power and eventually finished in a disappointing 16th place due to pulling over on the pit straight on the final lap.

All race long, it was looking like Guanyu Zhou would take victory. However, skilful work from the Australian rookie denied him a second Formula 2 victory.

Zhou did well to keep ahead of Piastri for as long as he did, given his older tyres. Hopefully for him, he can make up for the disappointment as he starts on pole for tomorrow’s Feature Race.

What a race! Two rookie winners in two races, are we in for a third in the Feature Race? 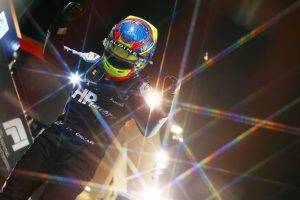