In what was yet another chaotic qualifying session at Monza, Piastri stayed out of trouble to extend his championship lead over his UNI Virtuosi rival, Zhou, from five points to nine points.

Despite cloudy conditions, Qualifying would be humid, with temperatures hitting 26 degrees before the cars headed out on track.

DAMS, who had both of their cars suffer technical issues in the morning’s Practice, got Marcus Armstrong and Roy Nissany’s machines fixed in time for the 30-minute qualifying session. However, both would have work to do after missing out on crucial track time.

At the greenlight, 21 out of the 22 drivers took to the track, with the field queuing up behind each other trying to find enough room for a clean lap, while also seeking a tow down Monza’s long straights.

Jüri Vips led the pack, seemingly happy to push without a slipstream. In reality, he had other ideas and went through the pitlane to rejoin at the back of the field. Theo Pourchaire did the opposite of the Estonian and was the first man to go for a push lap albeit without a tow.

Pourchaire’s first run was a 1:33.205, which was quickly beaten by Dan Ticktum. Ticktum continued his excellent form from the morning’s session to go quickest with his time of 1:32.650 good enough for him to leapfrog both Vips and Pourchaire.

Ticktum would be knocked off provisional pole by Ralph Boschung, who pulled a rabbit out of the hat with an astonishing lap of 1:32.609 to go quickest for Campos.

Boschung’s reign at the top of the timesheets didn’t last long as championship leader Piastri went fastest with a 1:32.402. The Australian pushed his PREMA hard, setting the quickest times in the second and third sectors.

At the halfway stage in Qualifying, Piastri led Boschung and Ticktum, with Hitech’s Liam Lawson, Felipe Drugovich and Vips close behind in fourth, fifth and sixth.

Further back,  Daruvala led Zhou and Robert Shwartzman, who were only eighth and ninth on their first runs. Marino Sato was 10th quickest for Trident.

With just over 10 minutes left in the session, all 22 drivers went out for their second runs. Once again, the field queued up behind each other with drivers blocking one another in what has recently become a tradition for Qualifying at Monza.

The only man who didn’t have traffic in front of him was Boschung after being called to the weighbridge in the pits, causing the Swiss driver to push on his out lap as he sought a tow.

Miraculously, Boschung’s unscheduled trip to the weighbridge paid off as he temporarily pipped Zhou for second place on the grid after going quickest in the second sector.

Lawson was next to go quickest with a 1:32.383 on his final run. Still, the Kiwi lost provisional pole shortly afterwards after Piastri produced a storming final run to retake pole position ahead of Daruvala, championship rival Zhou and Lawson.

Felipe Drugovich was fifth, ahead of the impressive Boschung, whilst Pourchaire, Ticktum, Vips and David Beckmann added to Campos’s cup of joy with 10th.

Lirim Zendeli was 11th ahead of Shwartzman in what was a nightmare Qualifying session for the Russian. Series debutant, Enzo Fittipaldi, enjoyed an excellent 13th on the grid for Charouz. 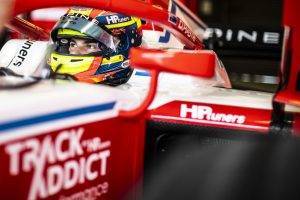