Piastri’s fourth pole of the year also means that he extends his championship lead over Guanyu Zhou to 40 points. His Chinese title rival could only manage the sixth fastest time.

The start of Qualifying was delayed by five minutes, as the Jeddah Chornice Circuit continued to suffer from its early teething troubles.

But at 18:25 local time, the session finally commenced with DAMS’ Roy Nissany leading the majority of the field as they exited the pits to start their out laps.

ART’s Theo Pourchaire was the first man to throw down the gauntlet, with the young Frenchman setting a 1:42.480 to go briefly fastest in the opening stages of Qualifying.

Pourchaire’s reign at the top ended shortly afterwards, as Robert Shwartzman moved himself to the front of the timesheets with a 1:41.747. Shwartzman sat ahead of PREMA teammate, Piastri, and Ralph Boschung who continued his excellent form from Practice to go third quickest after the first runs.

Pourchaire hit back on his next run to re-take the provisional pole from Shwartzman after setting a 1:41.364, but the Russian returned to the top of the timesheets as the session approached the halfway mark on his next run.

As the field pitted for a fresh set of rubber, Shwartzman led Pourchaire, Piastri and Christian Lundgaard, with Felipe Drugovich and Dan Ticktum close behind but over half a second down.

Clement Novalak was the best of the debutants in eighth ahead of Zhou, who was struggling down in ninth, with Jack Doohan five places below his former Trident teammate in 13th.

Olli Caldwell and Logan Sargeant were stuck in 19th and 20th place, whilst Alessio Deledda had yet to set a time.

With over 10 minutes left in the session, the field went back on track after taking on a fresh set of tyres, barring Deledda, who stayed in the pits.

Ticktum’s chance of pole position was severely diminished after he was called back into the pits. A right rear puncture scuppered his second run after the Brit rode the kerbs.

The final runs saw a four-way dual for Feature Race pole position with Zhou, Pourchaire, Shwartzman and Piastri all in contention.

But it was Piastri who came out the winner, after a monster final lap that was good enough for him to secure his fourth pole position of the year, and fourth in a row, ahead of Shwartzman and Pourchaire.

Lundgaard managed to hoist himself to row two with the fourth-fastest time, whilst it was an all UNI-Virtuosi affair behind, with Drugovich ahead of Zhou, who could only manage a disappointing sixth.

Liam Lawson will be on pole for the first Sprint Race with countrymen Marcus Armstrong alongside him on the front row.

Novalak was the best of the debutants, with the 12th fastest time ahead of Doohan in 16th. Caldwell will line up 19th on the grid ahead of Sargeant in 21st, who completes an all HWA Racelab back row, as Deledda didn’t set a time. 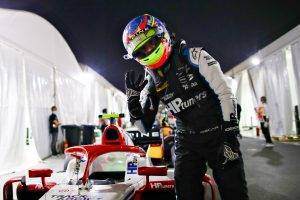