The Monza circuit is renowned for cars maximising the slipstream of the car in front, and today was no exception.

With the pack bunching to maximise the drag for a better lap time, track position was essential.

“I made one pretty big mistake today and I got a nice slipstream in sector three which helped. My pole lap was a solid lap”

Despite being new F2 rules disallowing queuing when qualifying, the cars were still close together throughout all three runs.

“By default we were in the middle/back of the pack, and for the flying laps I don’t think anyone got blocked.”

Comparing his experience today, to last season in Formula 3, where Piastri went onto win the championship, the F2 rookie said.

There are advantages of following the tow of a car as it punches a hole through the air, but focus on Sunday’s Feature Race will depend on the car set up, and having clean air for the corners.

“The start could be the deciding factor for the majority of the race, because the only other opportunity may not present itself until the end.

“Tows will make a difference, but the launch will be the biggest deciding factor. Hopefully from pole on Sunday, I won’t give a tow to someone behind.”

Before Sunday’s main event, there are the two sprint races to gain points from, “Race 1 will be very interesting tomorrow into Turn 1. There’s room for two cars into the first corner but I’m hoping nobody misses their braking points, including me.

“I don’t want to get stuck and be muscled out on Turn 1 but I can brake much later.”

The PREMA car is once again looking strong this season and Piastri will attempt to extend his championship lead by creating a gap on Sunday to Guanyu Zhou, who sits just five points behind him in the Drivers’ Championship.

“I think we can be confident we have a package to escape the pack, and go on to win.” 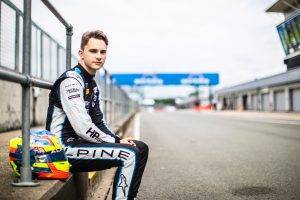