Oscar Piastri converted his pole position into an excellent victory in the FIA Formula 2 Feature Race at Monza to claim his first Feature Race win in the series.

The PREMA driver lined up on pole position, with Sprint Race 2 winner Jehan Daruvala alongside him.

Piastri got a great start to lead the field into Turn 1 at the Rettifilio chicane, while his championship rival, Zhou, jumped up from third to second to get ahead of Daruvala.

Piastri’s Russian team mate, Robert Shwartzman, began the Feature Race in a lowly 12th position but moved up to P10 in the opening stages.

Midway through the first lap Guilherme Samaia span his car at the second Lesmo. The Brazilian was forced to retire triggering a Virtual Safety Car, then a full Safety Car in order to clear the stricken Charouz.

Piastri had a solid restart and led into the Rettifilio even with Zhou challenging him for the lead at the end of Lap 4, albeit without any DRS assistance.

Hitech driver Liam Lawson muscled his way past Zhou at the Della Roggia chicane. The Kiwi stormed around the outside to take P2 in a very confident move.

Race leader Piastri continued to extend his advantage. Crucially the gap was over a second by Lap 8 meaning the 20-year-old was out of DRS range.

The Safety Car was deployed for a second time on Lap 8 as Juri Vips retired with a mechanical issue. Ticktum who began on the medium tyre clattered the Hitech and suffered minor nosecone damage.

The majority of the field chose to serve their mandatory pit stop during the safety car period and switched to the medium tyre.

UNI-Virtuosi’s high-running Felipe Drugovich, unfortunately, lost time in the pit lane. With his high running position towards the front of the pack, he had to wait at the pit box behind team mate Zhou as Virtuosi double-stacked their drivers.

Ticktum stayed out and led the race under the Safety Car, ahead of Marino Sato and Christian Lundgaard, who also started on the medium tyre.

Sato’s time at the front didn’t last long as he dropped out of the race on Lap 10 after the Japanese driver’s car stopped at Rettifilio.

When the Safety Car was brought in at the end of Lap 10, Ticktum continued to hold the lead ahead of Lundgaard.

Behind the new race leaders, Daruvala passed Zhou at Della Roggia but went off the track when moving up to P6. The pair went to battle again one lap later at Turn 4, with the Chinese driver this time coming out on top on the rematch in a similar move.

Piastri continued to make progress through the field passing Marcus Armstrong into Ascari on Lap 13. The PREMA driver made use of his much fresher tyres to move into third place.

Zhou pulled off an identical move on Armstrong at Ascari one lap later to keep his championship within DRS range.

Drugovich’s troublesome day in the pit lane continued to get worse. A miscommunication with the pit wall led him to come in for an unnecessary stop to drop the Brazilian back to P18. The Virtuosi driver and his engineer confused each other as both men thought there was front wing damage when it was, in fact, fine.

Piastri enjoyed his second move of the race at the Ascari chicane to get past Lundgaard on Lap 15 to jump into second place behind Ticktum.

Zhou pulled off the same trick as Piastri just one lap later when he rocketed past the ART driver at Turn 8 to keep the pressure on the PREMA driver for the win.

With 11 laps to go, Shwartzman breezed past Enzo Fittipaldi on the main straight to move up into eighth position.

Piastri’s march forwards continued as he began to close down the yet to stop Ticktum. Ticktum had more pace than Piastri’s previous victims, however, meaning the Aussie had to keep calm in second place.

Lundgaard was the first of those on a contrary strategy to blink as he pitted in on Lap 22 to switch to the soft tyre. Yet had he held on a few moments longer, it may have been a wiser decision.

Lawson ground to a halt on the pit straight at the same time Lundgaard pitted after his fire extinguisher went off. His Hitech car stopped right at the pit exit and the Safety Car was deployed.

While not ideal timing for Lundgaard, this was a fortunate stroke of luck for Ticktum. The British driver pitted for the soft tyre under the Safety Car to only drop back to P11.

When the Safety Car came into the pits at the end of Lap 24 Piastri just held onto the lead into Turn 1 from Zhou’s attacks. Zhou, though, had a second bite at the cherry at Della Roggia. It was the closest the Chinese driver had been to Piastri, but he couldn’t make the move stick.

Elsewhere, Ticktum moved up to P9 at the restart. The Carlin driver went off the track at the second chicane after Ralph Boschung hit his right rear tyre. Ticktum miraculously avoided any contact with other cars as he cut across the track once he regained control of his Carlin.

Undeterred, the British driver made excellent progress after the restart to find himself in P5 with four laps to go after storming past Shwartzman.

Ticktum’s next target was his team mate. The Brit easily passed Daruvala, who didn’t put up much fight, to claim fourth.

With three laps remaining, the Carlin driver made up yet another place and took P3 away from Pourchaire into Turn 1. If he could keep his pace up, a Ticktum race win would be within reach.

It wasn’t to be this time. The Safety Car was deployed, yet again, with one lap to go after a collision between Bent Viscaal and David Beckmann.

The late timing of the incident meant the race ended under the Safety Car. Piastri took the chequered flag to win at Monza and extend his lead at the top of the championship over Zhou.

Ticktum rounded off the podium in third place after a superb late charge through the field.

After this frantic weekend of action, FIA Formula 2 will return on the 24-26th of September at the Sochi Autodrom in Russia.

Let us know your thoughts @F2inside on Twitter and join our ever-growing community of Formula 2 fans! 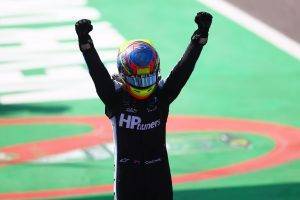