Haas F1 Team’s, Pietro Fittipaldi, is a familiar face in the FIA Formula 2 paddock. The F1 reserve driver chatted exclusively to insideF2 at the post-season test about his own potential plans for 2023, and his brother Enzo’s F2 season with Charouz.

“I think he was fantastic, he did an amazing job. Obviously he was recovering from the [Jeddah 2021] accident since the beginning of the year. I remember going to the test in Bahrain, the time really flies, it was as though it was yesterday, and he was on crutches.

“The first two race weekends were difficult, he wasn’t 100%. And finally he had a breakthrough at Imola; He was able to arrive a lot stronger. He’s racked up six podiums this year, and there were a couple of weekends where they could’ve maximised a little more. Paul Ricard they were really quick, and then they had an engine failure in Qualifying. Spa, he got a penalty there, which he ended up losing a lot of points.

“At the end he came into Abu Dhabi fighting for top three in the Championship; I think only 7-8 points from the top three. He gave it all in the last weekend, but just missed out.”

Finishing in P8 overall in the Drivers’ Championship with 123 points, the younger of the two Fittipaldi brothers accumulated almost all of the 130 Teams’ Championship points for Charouz single-handedly.

“It was an amazing season by him, as well as by Charouz. He got along really well with his race engineer and the team and I’m super happy for Enzo.”

Pietro divides his time between the F2 paddock and the Formula One garage of the Haas F1 Team, being their reserve driver for the last four years. Debating whether he’ll continue with them next season, Pietro said:

“It depends on what I’ll be doing next year. I do have the goal of being able to race in IndyCar full-time. That would be amazing if we were able to do that, but it’s just so hard. Initially for the first year you need to bring a lot of the funding for it; We do have some offers but it’s difficult to put that funding together.

“If I don’t end up being able to go racing in IndyCar then we’ve had some very good sports car races this year – I raced with a smaller team in Inter Europol and we evolved a lot from the middle to the end of the season; We really turned it around and finished on the podium at Spa.

“I started seventh at Portimao, went into the lead and led the race for two hours and had the best Qualifying for the team ever in Monza.

“I do have some offers to race in WEC next year which will be really really cool. If I do WEC then there would be a possibility to continue at Haas. I’ll speak with Guenther [Steiner] to see. But if I do IndyCar it will be more difficult to be possible, but let’s see what happens.”

Pietro summarised his time at Haas:

“It’s been a great experience. I’ve been with the team already for four years. I had outings at Bahrain, and I tested at the pre-season test. I got two FP1’s. Unfortunately Mexico was really short, we had a turbo failure. But then we had another FP1 outing here [Yas Marina] which was better. We were competitive straight off the bat.

“I tested on Tuesday, next years tyres, and it was super competitive also off the bat so I was really happy with that; To be able to show a good performance to the team, which is always important, and to be able to learn a lot from the testing to help the team with next year’s tyre.

“I’ve known a lot of the people there for many years. You usually go with the team one or two years maximum but I’ve been there for four and a half years so I know a lot of the guys really well and it’s like a family there and we all push each other.”

We here at insideF2 wish Pietro a successful 2023, and look forward to bringing you all of Enzo’s racing news when the next Formula Two season begins. 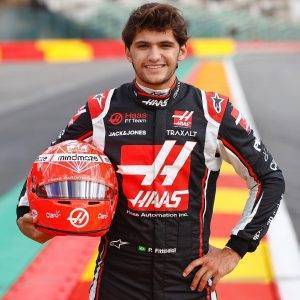