In only his third points finish of the FIA Formula 2 season so far, Marcus Armstrong believes the tide could be turning on his troublesome campaign.

After back-to-back retirements in Baku, achieving his first podium of the year with second place in Sprint Race 2 couldn’t have come sooner and it was clear how much this meant to the DAMS driver.

“I’d say a bit of relief, it’s been a long time coming. Unfortunately, we ran into a few issues in Monaco and also in Baku we were a bit unfortunate.

“I feel as though it’s sort of been a podium that been taking its time.”

Lining up second on the reverse grid presented Armstrong with a golden opportunity for success at Silverstone. However, there may be some unanswered questions for the Kiwi as he struggled to bring the fight to race leader Richard Verschoor.

“Obviously, I would have preferred the middle step [P1] and genuinely thought it was possible today seeing as Richard didn’t have a very good start this morning.

“It was a decent delta in terms of start performance, and I thought if the same thing happens today, we should have had P1 before Turn 1, but he nailed it.

“I’m extremely happy to be here and it’s the start of hopefully a good run of results.”

Similarly to the first Sprint Race earlier that morning, drivers up and down the grid found overtaking to be no easy feat. Armstrong found himself struggling to remain within the DRS window of the MP Motorsport car ahead, despite the two Safety Car restarts.

“I watched a bit of the race this morning and I saw how difficult it was to stay in DRS. I was reasonably confident that I would come out of the first corner leading so I thought it would work well into my advantage.

“I think that the clean air makes a massive difference, you just have a lot more downforce and it’s a lot easier to drive in a straight line.

“It’s something that you can’t really quantify when you are driving but when you finally get it, it’s like a lovely breath of fresh air.”

Nevertheless, the lack of overtaking opportunities proved to be to Armstrong’s detriment and advantage as Carlin’s Dan Ticktum eyed up any chances to capitalise on his mistakes, something which came as no surprise to the Ferrari Academy Junior.

“Dan was quick. I knew he would be because he was quick in the first race this morning but he’s very quick in the high speed corners it seems. He managed to be very close to me the entire race, always in my DRS so fair play to him.

“It’s impossible to overtake unless I make a fairly big mistake. On my side, the car was very good, so a mistake wasn’t going to happen today.”

As Formula 2 heads towards the halfway point of the season, building momentum will be paramount for the 20-year-old as he returns to familiar hunting grounds.

“I genuinely feel that we should be a lot further up the grid than what we are and what we’ve shown so far.

“Going to circuits like Monza and Sochi where I have enjoyed great success in the past, it gives me a lot of confidence. Also, it boosts the team morale a bit because we all deserve the results.”

Extracting all the performance available will be his key target for Feature Race and considering the varying pit stop strategies available, we could see Armstrong in the hunt for points once more from 14th on the grid.

Can Armstrong make it two points finishes on the bounce in the Feature Race? 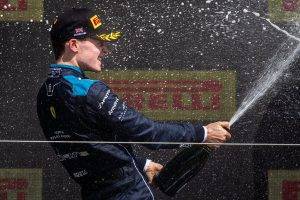