Points and Problems for Hitech in Abu Dhabi

Points and Problems for Hitech in Abu Dhabi

Hitech claimed more points with Liam Lawson and Juri Vips at the final round of the 2021 FIA Formula 2 season.

Lawson started Sprint Race 1 from fourth, showing a good pace throughout to finish just one place back in fifth by the time the flag fell.

The second Sprint Race saw the New Zealander start and finish in sixth place to bring home another haul of points.

The Feature Race wasn’t very good, however, after engine problems forced the 19-year-old to retire from the final event of the season.

Although Lawson grabbed points on Saturday, he explained that wasn’t overly happy with his time in Abu Dhabi: “In terms of the weekend, I’m pretty disappointed with how it ended.

“Today ended with a DNF as the engine stopped. That’s a real shame, so now I am looking forward to Tuesday when I get my first taste of F1.”

Lawson’s team mate, Vips, didn’t have such a good qualifying. Having qualified in 15th after his lap time was deleted, the Red Bull Junior would start the main Feature Race and Sprint Race 1 with a mountain to climb.

That first Sprint Race saw the Estonian climb up the field from 15th to 12th but there might have been more. Vips went off on the first lap, losing places and unable to get as far up the field as he wanted.

Speaking after Sunday’s main event, Vips said, “It should have been a strong finish to the weekend today.

“The pace was good in the Feature Race, and I would have got P6 but was penalized for hitting Lundgaard which I didn’t. Jehan (Daruvala) told me himself that it was he who hit Lundgaard.

“The rest of the weekend was one to forget, pushing the limits in Quali I had my time deleted so had to start way back on the grid.

“I went off on lap 1 and lost 7 places so couldn’t get reverse grid pole for Race 2 which had been the target.”

Vips and Lawson finished 6th and 9th, respectively, in the championship standings and both have their sights set on next year. This week Lawson will get a taste of F1 machinery in the Young Driver Test, too. 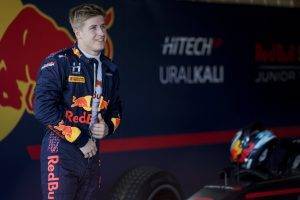